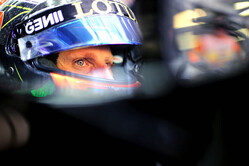 Lotus F1 Team opened the Singapore Grand Prix with a promising FP1 but an underwhelming FP2. Pastor was tenth fastest in the first session, with Romain fourteenth, whilst the later session saw the drivers end the session in sixteenth (Romain) and eighteenth (Pastor).

Romain Grosjean: "Marina Bay can be a tricky circuit to get on top of and today we struggled to get the pace out of the car. We have some work to do on set-up and it's always difficult to get a clean lap here with the traffic. I didn't get the cleanest of laps when we went on the softer tyres so we know that we can easily do better than sixteenth. We've got some work to do to refine the set-up ahead of tomorrow, but we've got a fairly good idea where to look. I'm sure we'll be in a better position come qualifying."

Pastor Maldonado: "The car felt pretty good in the first session and our pace wasn't bad. For the second session the car didn't feel great so we need to understand the changes we need to make for improvement. There was a small issue with a sensor in FP1 which meant my session ended slightly early but it was no big drama."

Nick Chester, Technical Director: "We completed a decent tally of laps today however we weren't able to demonstrate the pace we think we have in the car. Romain conducted further tests and aero assessments with our new front wing in the first session whilst Pastor was able to show top ten potential with his run. The second session wasn't as productive in terms of pace, but we have all the ingredients to be able to improve tomorrow."