Lotus duo look ahead to Singapore 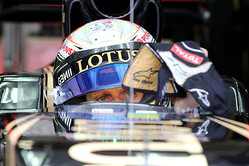 Being taken out from behind was not something Romain Grosjean enjoyed in Monza, so he heads to Singapore hopeful of a clean race to the chequered flag.

How much do you enjoy the challenge of Marina Bay?
Romain Grosjean: The track is really impressive with some technical parts and some classic street circuit 'ninety degree' turns. There are a few decent straights but it is mainly busy, busy, busy for us, with corner after corner. Going over landmarks like the (Anderson) Bridge and down the Raffles Boulevard make for a fantastic sight from both the cockpit and also for the TV viewers. This year will be interesting with the E23 as it is a car that does inspire confidence, and confidence is king when you're on a street course. The biggest challenge will be if it's wet at any time - then we really have to work hard!

Any special preparations for the physical demands?
RG: The key elements are sleep and hydration. It's a humid heat so you sweat a lot - even walking into the track. Keeping hydrated is very important. It's a race where we run unusual timings relative to the local day. Once you get used to waking up in the afternoon and then going to bed early morning, then it gets to be just routine. It's no secret that I love my sleep so one of the most important aspects of preparation for me is ensuring that my room stays dark in the morning when we're still sleeping due to the timings we run. I hope the hotel has good blackout curtains! If it doesn't then it's not unknown for me to tape black rubbish bags to the windows to keep the light out and guarantee my sleep!

What about the atmosphere of Singapore on Grand Prix weekend?
RG: I really love racing at this track and in fact I love the country as a whole. The Singapore people are very friendly and it is nice to see so many coming downtown to the race. It has a completely unique vibe for the Grand Prix weekend and it takes on an ambience like nowhere else we go to.

Will you be sampling any street-food?
RG: I love the mix of cuisine you find in Singapore. For what is a relatively small place there is such an amazing fusion of cultures and this means there's a really diverse mix of foods. You can get some really interesting dishes from the street vendors and there are some world class restaurants in town too.

What memories stand out for you at Marina Bay?
RG: Qualifying in third place in 2013 was nice, but then I had to retire, so the memory is a little mixed. Actually, it is still a good memory to have such a strong qualifying because I think that at a street circuit like Marina Bay, a driver always makes that little bit of difference to the ultimate lap time, a little more so than permanent tracks. In 2012 I got points for seventh place, after some good battles. So I have some nice recollections of racing here.

What were you able to take from Monza?
RG: Once again we all saw what a tremendously strong and resourceful squad Lotus F1 Team is as everyone rallied round and overcame the difficulties put in our path. Everyone worked really hard. We started in the top ten but then another driver's optimism at the first corner of all places meant the rear suspension of my car was damaged. That was it, race over. I was pretty gutted, but we carry on and Singapore's our next opportunity for points.

Can you see Singapore offering a better chance of a result?
RG: Even though we haven't been able to throw upgrades at the car like other teams can do, the E23 is a pretty balanced car in its qualities; it seems to go well everywhere. This means we go in with the opportunity of scoring points at tracks with very different characteristics. Every time I get in the car I think 'let's see what she can do', so I'm positive heading to Singapore, Suzuka and all the rest of the circuits ahead.

Driver of car thirteen, Pastor Maldonado, looks to the challenges of Marina Bay for the thirteenth race of the 2015 season.

What's your outlook looking to Singapore?
Pastor Maldonado: I'm positive. Singapore's a fantastic event, it's a fun circuit and we've got a great car. We've shown at many different circuits that we can perform well this year so it's another race where we want to get out there and put in a strong performance.

What's the key to a good lap at Marina Bay?
PM: Traction is fundamental in Singapore, it's a really big factor. This is because the corners are generally slow and tight, so it means the way we exit them will be critical to ensure a good lap time. It will be tough to regulate the torque and the traction out of the slow speed corners. Then you look at all the normal things for a fast lap. It's a track where you can't make mistakes because the walls are so close.

Is Marina Bay a big physical challenge?
PM: Yes it is. Overall it is a very demanding track where you get no rest at all really. You are constantly turning or braking and there are only two short straights, not enough to really have a proper rest. But I like it this way because you get a rhythm going quickly. Physically it is tough because the humidity is so high and the race so long, much longer than Monza for instance.

Do you enjoy racing at night?
PM: To be honest it is not too different to racing in the day or at night. The main reason is quite simple - when we drive we do not look upwards, we are always focusing on what is straight ahead. The big change is the temperature of the Tarmac which is slightly cooler at night. So we have a slightly different approach because of this. We have to adapt our styles a little and make sure we create heat in the tyres as much as we can.

Any issues with the body clock re-set?
PM: As everyone knows, we stay on European time. Although some people say it is tough, I find it not to be too difficult. Once you have experienced it you get used to this way of living and it is only for a few days anyway. The physical demands are much harder because of the extreme humidity so I make sure I am very well hydrated in the days leading up to the race and of course during time in the cockpit. It is probably the most important part of our preparation.

What are your thoughts looking back to the Italian Grand Prix?
PM: It was another race I watched from our motor home and that's not how I want to spend my races! It was frustrating. I got a good start but received contact from another car and my race was over. We kept going for that lap but it was obvious the front suspension was damaged. I was lucky in a way as I was able to retire in the garage rather than Romain who tried continuing after the incident he was involved in, and had to park his car on track then find his way back. I could watch the race straight away! That's motor racing sometimes. The team had worked really hard and we were well placed for a race where we could have collected a lot of points. Looking to the future, the Italian Grand Prix was the last one of the European season so the last one with our motor home. Hopefully I enjoy the remaining seven races of the season for every lap behind the wheel of my race car.