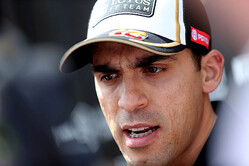 Lotus F1 Team crashed down to earth with incidents on the first lap of the Italian Grand Prix leading to a double retirement. Both cars started in the top ten but damage to each car in separate incidents meant that Pastor Maldonado parked his car in the garage at the end of the first lap whilst Romain Grosjean parked his at the side of the track early in lap two. The team now heads to the next Grand Prix in Singapore on September 18-20th.

Romain started from P8 on the grid on his qualifying soft tyres. Contact with Felipe Nasr's Sauber at the first corner meant damage to the rear of Romain's car and retirement early in lap two.

Pastor started from P10 on new soft tyres but contact with Nico Hulkenberg's Force India meant damage to Pastor's front suspension and he retired at the end of the first lap.

Romain Grosjean: "We had the potential of a good race ahead of us. I made a strong start but got hit by a car from behind in turn one which broke my rear suspension so that was it for us. It was a too optimistic move from Nasr who hit me which meant my race was over. It's been a tough weekend but everyone has made the most of the opportunities we have and the spirit of the team and the support from the F1 world has been amazing. The E23 still feels good so we head to the next races optimistic of more good results to come."

Pastor Maldonado: "It's been a tough weekend and this is racing sometimes. We keep united and keep pushing as there are still seven Grands Prix to go so time to recover and keep fighting. I had contact in turn one where the Force India came into the side of me and took out my front-right suspension and that was the end of my race. We were looking for a strong finish and we had potential for that. Everyone knows that turn one at Monza can be tough and that's what we saw today."

Federico Gastaldi, Deputy Team Principal: "What can you say? Everyone at Enstone, at the track, our sponsors, partners and suppliers would have liked to see a favourable result for us today but the cruel mistress that is motor sport gave us a resounding slap in the face. Both drivers had their race undone at the first corner and this was a real blow to all of us. We now focus on the next Grands Prix where we're determined as ever to score more points and keep fighting. Thank you all for your support."

Alan Permane, Trackside Operations Director: "A disastrous race for us with our cars retiring following incidents at turn one. Both drivers started in the top ten and we had potential for a good points haul but Monza's turn one can get very crowded on the first lap, which is what we saw today. It's been a challenging weekend for us, but the response from our fellow competitors has been tremendous and we thank them all for that. We've seen that the E23 has still got strong pace so we're heading to Singapore and Japan eager for clean races to re-ignite our championship fight."