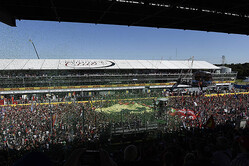 Tifosi hero warns that F1 must not lose Monza

Having described his second place as the best of his life - albeit 25s behind race-winner Lewis Hamilton, Sebastian Vettel launched an emotional plea on the circuit's behalf.

"It's fairly simple, it's the best second place I ever had," he told reporters. "The emotion on the podium is incredible. If we take this away from the calendar for any shitty money reasons I think you are basically ripping our hearts out.

"We are here, we are racing and this makes it so much more worthwhile," he added. "It's what we're here for. You stand on the grid, you look to the left, you look to the right, people are just happy to be part of it and it makes our day. It's incredible. So, thanks for this emotion on behalf of all the Ferrari team. Thank you."

His words, which are sure to earn a rebuke from Bernie Ecclestone who only on Friday warned driver not to criticise Pirelli, come at a time that there is genuine fear that Monza, which has hosted the Italian Grand Prix for all but one occasion in the entire history of the Formula One World Championship, may be dropped.

As ever the reason is money, the circuit, despite its best efforts, unable (as yet) to meet Ecclestone's demands.

Previously the historic Italian track, built in the 1920s, benefitted from a 'discount', but no longer, Ecclestone claiming the promoters are “ten million euros” shy of his asking price..

In its desire to retain the race, Italy wheeled out the big guns, including Prime Minister Matteo Renzi, who met with Ecclestone.

Having joined with thousands of others in signing a petition to save the race, Felipe Massa echoed Vettel's sentiments.

"I don't think they can take it out," said the Brazilian, never a winner here but a hero to the tifosi due to his time with Ferrari. "The history of Formula One, this is history here, here is part of what is Formula One... everything that Formula One grows is a lot thanks to these races as well, to these people.

"We race for the people and when you see the podium with a lot of people like that and they're screaming and crying, I don't think we can lose that. This is part of our blood and we cannot lose this type of races.

"I really like to go to new countries, we go to amazing countries, countries that I even didn't know what they meant before and then I love to go there, many different countries and I'm really in favour to go there but you cannot lose something which is inside the blood as well."

"This is one of the best tracks in the world," added race winner Lewis Hamilton. "This has to stay here for moral reasons. As Felipe is saying, all those fans out there who come every single year. Are you going to take this Grand Prix away from us and put on another one, that would not have the same feeling, or would not have the special impact so we definitely have to keep this.

The event was bookended by an emotional flypast from the Italian Air Force, red, white and green smoke filling the sky as the crowd rose to Fratelli d'Italia. Following the race, as is custom, fans filled the track for almost the length of the pit straight, at the heart of the crowd a gigant Ferrari emblem.