Hamilton closes on his third title with Monza win

OK, call us cynical, but there's this nagging feeling that the legendary Turk Thrust could be involved in today's proceedings.

Long-standing readers will remember that Turk, a confidante of Mike Lawrence, was (is?) part of the Formula One Script Unit (FOSU), the mysterious outfit discovered to be responsible for so many curious little happenings in the sport over the years.

With the 2015 title 'fight' flagging, just a little, have Turk and his pals at FOSU been recruited to add some spice?

Lewis Hamilton, alone, has the benefit of a new upgraded engine, but what if it should follow the example of teammate Nico Rosberg's and spring a leak.

And as Bernie Ecclestone continues his financial demands of the promoters, what if Ferrari should score a sensational 1-2, especially as the team had nothing to celebrate at its 900th appearance.

And what if, courtesy of those penalties, the Manors should find themselves in the points.

Fairy tales do happen in F1, like in any other sport, but other sports don't have the likes of Turk Thrust working behind the scenes.

Remember 1988, weeks after Enzo Ferrari's death, Gerhard Berger leading Michele Alboreto home, thereby wrecking McLaren's hopes of winning every round of the championship. Ever wonder who put forward Jean-Louis Schlesser's name to Williams as a one-off replacement for an unwell Nigel Mansell? 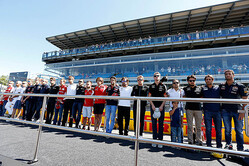 And 1998, four days after editor Balfe got married at the magnificent Villa Reale next door to the circuit, who pulled a few strings in order to ensure Michael Schumacher and Eddie Irvine scored their second 1-2 of the year, a sort of belated wedding president.

Whether Turk is involved or not, a Ferrari 1-2 would put a smile on the face of F1, at a time all the talk is of tyre safety, Mercedes dominance, teams in financial trouble, Monza being dropped, penalties, Lewis Hamilton's hair and McLaren's downfall.

If ever F1 needed FOSU, today is that day.

On the other hand, should Turk not have been contracted, we can expect a stroll in the (Royal) park for Hamilton. Though the Ferraris were superb yesterday, they cannot match the sheer power of the Mercedes, especially the upgraded package.

The numerous penalties, combined with the power deficiency of the Honda and Renault engines means we can effectively rule out six drivers from today's proceedings - unless Turk has other ideas. Indeed, Marcus Ericsson's grid penalty for impeding Nico Hulkenberg means that eight of the first ten cars on the grid are Mercedes powered... though only Lewis has the super-duper version.

Other than engines, gearboxes and tyres, the other issue here, and one that has already caused problems for Hamilton and Vettel, is brakes. Though Monza is not a car-breaker, not in the same way as some other tracks, it is a hard, unforgiving track.

As is the case with most tracks, the first corner (chicane) can often mean your race is over before its barely started, whilst the second chicane comes up on the drivers as they are still sorting themselves out into some semblance of order.

Romain Grosjean, despite his team's much-publicised problems is confident of a good result today, whilst, other than Hulkenberg's problem in Q3, the Force Indias have looked strong. Williams too appears quietly confidant.

In many ways, contemporary Monza is a bit of a let down. Today's race will probably be over in less than eighty minutes. However, those parts of the circuit that haven't been emasculated to within an inch of their lives - and what is it with those lime green strips by the side of the track - remain awesome, as does the sheer speed... and lets not forget the atmosphere, the history, the ghosts...

Tyres today are medium (prime) and soft (option) as at Spa. The quickest strategy for the 53-lap race is theoretically a one-stopper, although the teams are likely to take a flexible approach, depending on individual tyre degradation and race circumstances.

The best two-stopper is: start on soft, soft again on lap 19, medium on lap 36. There is also a different one-stop possible: start on medium and pit for soft at lap 24.

The two DRS zones are on the main pit straight and on the run from the second Lesmo down to Ascari.

Around two hours before the start of the race, Prime Minister Matteo Renzi arrived, not only in the hope of witnessing a Ferrari win, but to apply a little pressure on Bernie Ecclestone in keeping the race here.

One of his first duties on arrival was to join the drivers for a minute's silence in honour of Justin Wilson.

The pitlane opens and one by one the drivers head out in to the sunshine, accompanied by the cheers of the crowd.