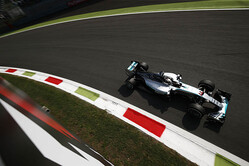 Ahead of today's qualifying session, the air temperature is 21 degrees C, while the track temperature is 34 degrees. This morning's damp conditions - the result of heavy overnight rain - have given way to bright sunshine.

With 13 wins from pole over the last twenty years, started from the usually coveted position is fairly important here... but not vital.

That said, facing hefty grid demotions as a result of various engine and component changes, the Red Bull and Toro Rosso drivers will be focussed purely on tomorrow's race, while the McLaren duo continue to put a brave face on things.

Though Sebastian Vettel offered the tifosi a glimmer of hope this morning, it is unlikely that Mercedes will be troubled this weekend, the, already dominant, team enjoying the extra luxury of an upgraded power unit that is not available to its customers.

Therefore, barring the intervention of the weather gods, the mother of all shocks or a brown envelope from Bernie, we can expect Mercedes to take its tenth front row lock-out of the season today.

Whilst we expect Ferrari to be 'up there', the Italian team given a power upgrade courtesy of the tifosi, the Mercedes customer teams will be strong despite not having the new engine.

Lotus, Williams and Force India should provide some genuine thrill this afternoon and tomorrow, whilst Sauber and Manor might benefit from the problems facing the Renault teams.

"Un-diagnosed engine problem for Nico in FP3 means we're reverting back to the Spa race power unit," reveals Mercedes just 15 minutes before the start of Q1. "As this engine is already in the race pool, he will not receive a penalty for taking the engine change. While the crew work hard to turn the car around in the garage, the engineers will be evaluating data to find the cause."

This means that only Hamilton has the new super-duper engine, Rosberg has the same unit as the Mercedes customers.

In the moments before the session, work is still underway on Verstappen's car and Ricciardo's, the Australian having changed his engine since FP3.

Stevens is first out as the lights go green, followed by teammate Merhi. Surprisingly, Hamilton is another early riser.

As more drivers take to the track, all bar the Manors are on primes.

"Massive problems with the Sauber," complains Hulkenberg after tripping up over Ericsson, "what's he doing?"

The stewards are investigating the Ericsson/Hulkenberg incident.

A sad indictment of its current situation, McLaren sends out both drivers, like Manor, on the option rubber. Sainz is also on the yellow banded rubber.

On his first flying lap, Rosberg posts 24.820 to go second, business as usual for the Mercedes duo.

With less than 8 minutes remaining it's looking unlikely that either Ricciardo or Verstappen are going to get out.

With the bottom five virtually decided there is no real need for the big guns to improve.

The stewards are now investigating a second incident involving Ericsson and Hulkenberg, the first at the Parabolica, the second in the second chicane.

Alonso goes fifteenth (26.763) despite a worrying wobble in the Parabolica.

Grosjean, now on options, improves to seventh with a 25.307.

As the clock counts down to under four minutes, Ricciardo and Verstappen appear to be getting into their cars.

Indeed, as teammate Kvyat posts 25.742 to go eighth, Ricciardo heads down the pitlane.

Sainz, currently fourteenth, posts a PB in S1 as Verstappen finally leaves his garage. Sainz crosses the line at 25.410 to go twelfth, while Ricciardo goes fourteenth.

In its eagerness to get him out, Toro Rosso has clearly got it wrong, his engine cover has not been properly screwed in to place and 'explodes' in the Curva Grande. "I lost bodywork," shouts the youngster.