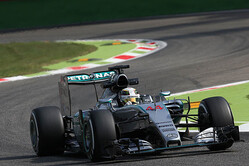 It would be fair to say that Lewis Hamilton absolutely blitzed the opposition in FP1, including his own teammate. Nico Rosberg was 0.463s off the pace, whilst third-placed Sebastian Vettel was a whopping 1.588s behind.

Even though it is only the work cars that have the benefit of Mercedes new engine - which has seen the German manufacturer use up its remaining development tokens - all but one of the Mercedes powered cars made it in to the top ten, though Romain Grosjean should rectify that when he gets his car back from Jolyon palmer this afternoon.

Whilst there were no major incident this morning, certainly not of the kind certain drivers were predicting in the build-up to the weekend, Carlos Sainz brought out the red flag when his car snapped out under braking for the Parabolica leaving him stranded in the gravel.

There were plenty of other incidents, including Sebastian Vettel spinning at the first chicane after a mighty wobble exiting the Parabolica just moments earlier.

Hamilton's fastest time saw the Briton average 153 mph, though that should be bettered this afternoon as the drivers try the option (soft) rubber for the first time. Following earlier reports that Pirelli intended increasing tyre pressure by as much as 4 psi, the manufacturer has in fact increased them by just 1. However, negative camber has been reduced and tyre blankets are to heat the tyres to 110 degrees only.

Following engine changes, the McLaren duo and Red Bull/Toro Rosso boys are all facing grid penalties of between 10 and 25 places. So far.

The lights go green and Alonso leads Stevens out on to the legendary tarmac. They are soon joined by Merhi, Raikkonen, Sainz and Perez.

As Alonso pits, Stevens posts 38.345 but this soon beaten by teammate (Merhi) who crosses the line at 30.186. Raikkonen subsequently posts a far more sensible 26.684.

Vettel goes quickest (26.548) and Hulkenberg third (27.049), the Ferrari driver complaining of an issue with "constant speed". Elsewhere, Ericsson complains of "no DRS".

Perez takes to the escape road having got it wrong at the first chicane whilst Ricciardo runs wide after getting the exit of Ascari wrong.

A 26.439 sees Hulkenberg go quickest, the German having been retained by Force India for a further two seasons.

"Do not shift gear," Ricciardo is told, the Australian cruising around the track very, very slowly.

Vettel re-takes the top spot with a 26.252 as the Mercedes boys come out to play.

In the McLaren garage mechanics are hard at work on Button's car, whilst back on track the Mercedes boys trade fastest sector times. Hamilton comes out on top, the Briton posting 25.285 to Rosberg's 25.451.

Maldonado fifth (26.507) and Grosjean eighth (27.012) as the Mercedes-powered cars stretch their legs. That said, the Frenchman has a bumpy ride over the gravel at Ascari.

"I think I need to stop," says Massa, the Brazilian having spotted a problem at the rear which is subsequently found to be a piece of errant cable.

Twenty-five minutes in and Hulkenberg is the first driver to make the switch to options, Sainz and Ericsson follow suit.

In the first sector Hulkenberg posts a PB, posting another in S1. At the line the German posts 25.720, to go third, having lost time behind a Manor in the Parabolica. Sainz improves to ninth (26.726).

More and more drivers switch to the softs, including Raikkonen. Again, a slower car (Kvyat) in the Parabolica compromises the Finn who posts 25.562 to go fourth, teammate Vettel, also on softs, having split the Mercedes with a 25.136. The German is just 0.095s of Hamilton's pace.

No sooner has Button taken to the track than he is told to "box". When he asks if there is a problem, he is told that an "abnormality" has been spotted.

Late, late, late on the brakes as he enters the pitlane, means clouds of tyre smoke from Sainz' car.

Vettel goes quickest with a 25.038 as Verstappen goes sixth having posted PBs in all three sectors. The youngster believes he has a problem with his recharging; "I'm losing speed," he complains.

Hamilton finally heads down the pitlane on the yellow banded tyres.