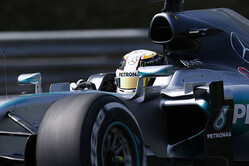 Ahead of today's opening session the air temperature is 19 degrees C, whilst the track temperature is 23 degrees. While cool, the skies are grey, with rain expected today and again tomorrow. Indeed, the chances of rain in this session are 20%.

Following the incidents at Spa, all eyes will be on tyres here, Pirelli providing the medium and soft compounds for the third successive race, a step softer than last season. However, the Italian company is introducing a number of measures this weekend including increasing the tyre pressures, a move which Lewis Hamilton claims will be a "disaster".

There are two DRS zones, the first on the long run to the first chicane and the second on the run from the second Lesmo to the Ascari chicane.

Hopefully there will be rain, for with Mercedes having the luxury of an upgraded engine - having used its remaining tokens - which will not be available to its customer teams, if it remains dry it could be a total walkover for the German team. Not for the first time.

Only one reserve driver on duty today and that's at Lotus where Jolyon Palmer once again gets to drive (Spa hero) Romain Grosjean's car.

Being such a one-off circuit, all the teams are running Monza specific aero updates , including another rear wing for Mercedes.

The lights go green and Vettel is first out, followed by Stevens, Alonso and Nasr. In moments, Alonso is complaining that he has "not much power". A similar problem for Rosberg; "no power, no power," he complains. Remember, the German team is running its updated engine.

Whoever has the licence for flo-vis sales here will be making a small fortune, some cars are smothered in it. Indeed, Ricciardo even has some on his helmet.

Given a few hints on how to sort his problem, a frustrated Alonso cries: "I'm trying to survive and get back to the pitlane, understand this, there is something wrong!"

Ten minutes in and Sainz is the only man on track, his teammate, Verstappen, who has never driven here before, is the only driver yet to appear. That said, moments later the Dutch teenager heads down the pitlane.

Sainz reports problems with his gearbox, including a false neutral whilst upshifting, the Spaniard locking-up at Ascari. "I cannot run like this," he complains.

Hulkenberg goes third quickest (27.368), but is over a second slower than the Mercedes.

Another improvement from Hamilton, the world champion crossing the line at 25.653.

A wobble in the Parabolica for Alonso, whilst Perez gets it wrong at the first chicane.

Oh dear, the sound of tyres squealing fills the air as Sainz spins off at the entry to the Parabolica. Unable to get out of the gravel the session is red flagged.

Replay shows the Spaniard became a passenger the moment he applied the brakes.

The session resumes but as the 'free tyre' opening half hour has come to an end, there is no mad rush to get back to work.

After around ten minutes of inactivity, Ricciardo heads down the pitlane to get things going again. He is subsequently joined by his teammate and Perez.

Ricciardo improves to fifth with a 26.922, the Australian and his teammate facing a grid penalty on Sunday as the team changes engines yet again.