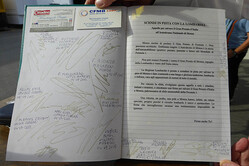 Whilst the verbal skirmishes over a new contract between Roberto Maroni, President of Regione Lombardia, and Bernie Ecclestone continue...

Maroni on Thursday: "Ecclestone must understand that money is not everything"

The Regione Lombardia's quest to obtain signatures for its petition to keep the Grand Prix at Monza continues.

Currently the petition, which is being put together with the help of Italian photojournalist Nicolangelo Cioppi, has around 41,000 signatures.

Ssome of the top drivers have already signed up including Sebastian Vettel, Fernando Alonso, Jenson Button and Felipe Massa, with many more drivers and F1 insiders expected to add their names.

It's not known how Mr Ecclestone will feel about that, especially in light of his 'request' that drivers are not to publicly criticise the sport, however, as previously reported, Maroni is even hoping to get the F1 supremo's signature in the book.

Maroni is confident a deal will be done, telling reporters: "Monza is 99.9 percent safe. We have told Ecclestone we want to close the deal and we will do it by the end of this year. We now have three months to put the money together."

However, just in case, today Italy's Prime Minister, Matteo Renzi, will be at Monza to throw his weight behind the campaign. 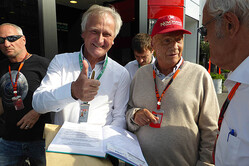 Ahead of the race, which sees the Ferraris of Kimi Raikkonen and Sebastian Vettel start from second and third on the grid, team boss Maurizio Arrivabene said that whilst his team could not get involved in the discussions with Ecclestone, an F1 calendar devoid of Monza would be unthinkable.

"The grand prix of Italy is Monza, I want to be very clear on that," he said. "The only picture that I saw in Maranello of Enzo Ferrari at a track actually was here at Monza and I said many, many times something very clear: there is a core of Formula One that in my opinion is represented by Monza, Spa Francorchamps, Hockenheim, Silverstone and Monaco.

"This is the core of Formula One and I think we have to preserve it. Because every person that is losing his own culture, he's losing the roots, he's not anymore a person - I mean if we are talking about human beings. But also for these kind of things. If we are losing the core in my opinion then we are losing the show, so I think we can do everything that is in our possibility to defend a grand prix and the clear statement is the following: the grand prix of Italy is Monza.

"I have nothing against all the other grands prix, because it is an international show but even a show has a core and the core for Formula One is the number of grands prix that I mentioned before. This is my personal opinion and it's also I think our opinion as Ferrari.

His thoughts were echoed by company chairman Sergio Marchionne. "It's certainly my expectation that rational human beings will find a rational answer to the problem," he told Reuters. "The definition of rationality includes an understanding of the importance of the circuit in the context of Formula One.

"The fact that we didn't run a German Grand Prix this year is nonsense, both Germany and Italy are home turfs to, at least for now, two of the most successful teams in Formula One. And you can't ignore home turf, you just can't. So whoever makes this decision better keep that in the back of their minds as I'm sure it matters to Mercedes to continue to run in Germany."