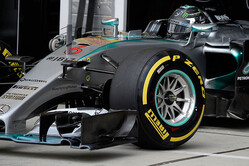 After an overnight investigation, Mercedes has discovered the root of Nico Rosbefrg's engine issue in FP3.

The German qualified fourth, 0.306s off his teammate's pace, after being forced to change engines following a problem with his planned race unit in FP3.

The replacement power unit, which is not the latest specification, was previously used in Spa and is now being entered for its sixth race weekend.

"Unfortunately, after the problem I had to run an old engine so I had a small lack of power," said the German. "With every kilometre you lose a bit of power and Monza is a power track where the engine has a big impact. It will be tough tomorrow, as I will probably also be a bit slower in the race because of that."

This morning, amidst concern that the issue might strike again, Mercedes revealed: "Overnight investigation has revealed the cause of Nico's problem in FP3 yesterday. This was traced to a leak in the cooling system which contaminated the Power Unit, not a problem with the engine itself. The Power Unit will be inspected in the coming days to decide if it can be used again at future races."

Lewis Hamilton, who has admitted to concern at Ferrari's pace, is running the new upgraded engine, which has powered him to the top of the timesheets in every session.