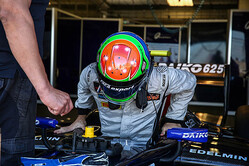 Sergio Canamasas has signed an agreement with Team Lazarus and will race under the Italian banner in the five remaining events taking place at Spa-Francorchamps, Monza, Sochi, Sakhir - which was added to calendar as the German round was cancelled- and Yas Marina.

Apparently, it was the good working relationship at Silverstone, where Canamasas set the fastest lap time on Sunday, that led to this agreement.

"It is a real pleasure for me to announce I will contest the rest of the season with Team Lazarus," said Canamasas. "It is always great to work with them and I am very much looking forward to getting great results with this team. We have ample time to achieve good results this season. The team has told me how excited they are as I will drive one of their cars again as Zoel was forced to miss the Hungarian races due to physical conditions and medical tests couldn't reveal the cause.

Lazarus has always been very supportive and it is a key factor for any driver," he continued, "obviously we will try our best. I have plenty of experience at this track and of course, like any other driver, I love it! Weather is always very changeable and unpredictable and becomes a key factor most of the time. Last but not least Spa is a good track for overtaking manoeuvres."

Canamasas, who has also driven for MP Motorsport and Hilmer Motorsport this season, scoring points in both Monaco races with the former, will hit the track on Friday with free practice at noon.