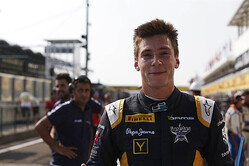 With the track temperature peaking at 50 degrees, the Hungaroring proved too difficult in more ways than one.

Battling the humidity and tyre degradation, DAMS pilot Lynn took to the circuit whilst the remaining field waited in the pits. After setting a 1:28:022, Lynn promoted himself to the top spot with no traffic and was ultimately unbeaten.

Vandoorne, just shy of the pace, was second, with Arthur Pic in third. Raffaele Marciello starts in fourth with Pierre Gasly and Jordan King completing the third row. Rio Haryanto and Mitch Evans finished in seventh and eighth respectively, whilst Sergey Sirotkin and Nick Yelloly round out the top ten.