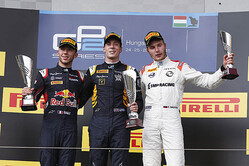 Split strategies proved to be the deciding factor in Saturday’s race as Alex Lynn stormed to his first GP2 Series Feature Race win.

Starting on the medium tyres served well as those on softs fell to the back of the pack.

Lynn clung on to the lead as the five lights went out whilst championship leader, Stoffel Vandoorne dropped to fifth.

The safety car was deployed after contact between Nicholas Latifi and Sergio Canamasas forced the latter into the barriers at turn seven.

Arthur Pic, Mitch Evans and Andre Negrao were the first of the field to pit on lap nine and ten; though Lynn’s race winning pit stop came much later on lap 24.

Vandoorne was handed a five second time penalty after an unsafe release.

Lynn – on fresh rubber – hunted down his competitors to sneak back into the lead. Late charges from Pierre Gasly and Rio Haryanto promoted the duo ahead of Vandoorne; and Sergey Sirotkin soon followed. The Russian put in a late overtake at the penultimate corner forcing contact between the Rapax pilot and Haryanto to earn what would be, third place.

At the chequered flag it was Williams reserve driver Lynn who bettered the rest, from DAMS team-mate Gasly and Sirotkin.

Haryanto limped across the line in fourth ahead of Vandoorne in fifth (after his penalty). Jordan King and Raffaele Marciello finished in sixth and seventh, whilst Nobuharu Matsushita finished in eighth and will line up in pole position for tomorrow’s sprint race. Robert Visoiu and Daniel De Jong round out the top ten and claim the last points.