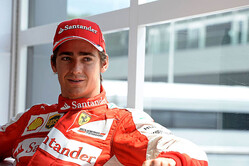 Whilst the American outfit has been rumoured to have three drivers under consideration, thought to be Jean-Eric Vergne, Esteban Gutierrez and Nico Hulkenberg, Steiner has added to the intrigue by suggesting that the team, which enter F1 next season, is looking at as many as ten potential drivers.

"We are talking with about people,” he revealed. "Some are higher up the list, some are lower, but we also want to see who is out there.

"It's difficult to find out who is actually available because it hasn't been decided who is going where yet," he continued. "Everybody is talking, but it's not only talking from our side, the people who are talking back to us, they try to sound out what would be available. So it's a little bit of getting in touch with people. Most of them we know anyway from before or we meet them now.

"I think we will make a decision, or we would like to make a decision, by the end of summer," he admitted. "Then we can be prepared for the driver, the car needs to fit the driver, we've got time to tell our drivers what we are doing because we are new. He needs to help us as well – what do you want us

"By September I hope we have got the decision for at least one, ideally two. But we have got interesting candidates which is nice for us, which have got a good reputation who talk to us seriously. I hope we can pull some of them off.

"Experience and speed as always, that is very important for us," he said. "But experience for sure is very important. We are a new team, we need to be self-conscious and we need some known quantities. Everything else is new. The whole team is put together with new people with the first car we make. It's a lot of unknowns so we need a known quantity in there which can tell us 'hey guys, I think the car is good, but this part of the car doesn't work' or 'the team works well, I've got a good relationship with my race engineers, but the car isn't good'.

"So we need somebody where we can see where we are at. We need experience, and if the experience is coming with speed, even better."

Currently, a number of F1 drivers have yet to be confirmed for 2016, the most notable being Kimi Raikkonen and Felipe Massa who are said to be key to the 2016 driver merry-go-round.

Other than the three drivers previously mentioned, this could mean Haas is looking at the likes of Perez, Sainz, Verstappen, Grosjean or Maldonado indeed, only seven drivers are currently confirmed for 2016.