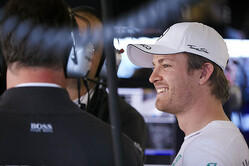 This being the start of the European season, along with the reappearance of the team motorhomes we can expect updates to come thick and fast.

Some teams are bringing more updates than others, whilst the anticipated 'B chassis' from Force India might not appear until Spa. Elsewhere however, there will be new noses, wings, floors and just about everything else as teams seek that vital fraction of a second.

At McLaren, of course, other than various upgrades, the MP4-30 has a new-ish livery.

However, some are already having more problems a new Williams-style nose at Lotus failed to pass the crash test, whilst Red Bull's did… albeit at the fourth attempt.

Tyre compounds available this weekend are the hard and medium whilst the two DRS zones are on the main pit straight leading to T1 and the back straight between T9 and T10.

A couple of teams have third drivers on duty this morning, Raffaele Marciello will drive Marcus Ericsson's Sauber, Jolyon Palmer drives Romain Grosjean's Lotus and Susie Wolff is in Valtteri Bottas' Williams as the sport marks the 40th anniversary of the last time a female driver scored a world championship point.

The lights go green, and Maldonado - a winner here in 2012 - leads the way, followed by Vettel, Sainz, Verstappen and Stevens. Vettel's Ferrari is smothered in flo-vis as the Maranello team ramps up its development campaign.

Alonso, Button and Hamilton are last out. Ricciardo, who is already on his fourth ICE of the season, complains of a throttle problem.

Coming out of the final corner, Rosberg runs a little wide, throwing up a cloud of dust. The German subsequently posts the first time of the day (1:31.039) whilst teammate Hamilton crosses the line at 31.205.

Ten minutes in and only the Manors are on track, surprising really when one considers the amount of upgrades to be tried and the 'free' set of tyres allowed in the opening thirty minutes. Stevens posts 37.732, with teammate Merhi subsequently stopping the clock at 38.649.

Purples in all three sectors see Hamilton improve to 28.993 however, Rosberg is also on a hot lap.

After the brief lull suddenly its fast and furious, Rosberg goes quickest (28.384), ahead of Hamilton, with Vettel third ahead of Verstappen and Maldonado. Nasr is sixth, ahead of Palmer, Wolff, Perez and Sainz.

Twenty-five minutes in and Ricciardo, Kvyat and Alonso haven't posted times… at which point the Spaniard posts 30.729 to go 12th.

Kvyat posts 29.981 to go 9th, leaving Ricciardo as the only driver yet to post a time. The Australian's cause isn't helped by a huge lock-up. He appears to have a problem as the team tells him to pit.

There follows almost twenty minutes of inactivity, certainly as far as the track action is concerned. In the garages however, the crews work frantically as they change parts and try to learn more about the updates. In the Red Bull garage, mechanics work on the rear of Ricciardo's car as the Australian (and his teammate) face another difficult weekend.

Finally, an engine fires up and a car heads out… it's Stevens. He is subsequently joined by teammate Merhi, Alonso and Hulkenberg.

Alonso, already suffering a stye in his eye (where else?), takes a pounding from the kerbs as he runs wide in T9. Nonetheless he improves to seventh with a 29.813. Only to be demoted when Hulkenberg posts 29.623.

More and more drivers return to work, including the Mercedes duo and Vettel.

Verstappen is told not to weave in the pitlane.