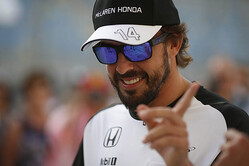 Ahead of this weekend's Spanish Grand Prix, which marks the start of the European season, it has been revealed that a CCTV camera has been installed at the exit of Turn 3, the corner where Fernando Alonso suffered his mysterious pre-season crash.

The previous lack of a camera at the corner has only added to the mystery surrounding the incident, an incident which still remains unexplained.

Other changes at the Spanish track include the enlargement of the openings in the walls around the outside of Turn 4 in order to allow better access for tractors, while the kerb on the exit of Turn 9 now starts significantly earlier and a new kerb at the exit of Turn 15. Also, two additional rows of tyres have been added around the outside of Turn 16.