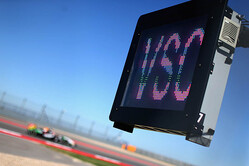 Meeting in Doha, the World Motor Sport Council has today announced a number of changes to the Sporting and Technical Regulations.

Along with these changes to the regulations, the FIA President confirmed that the next meeting of the Strategy Group will take place on 18 December, and will focus on reducing costs, improving the show, making cars quicker and more difficult to drive, and reviewing the technical and sporting regulations, with the aim of simplifying the rules where possible.

Points for both titles will no longer be doubled for the final Event of the Championship.

After consultation with the Teams who raised a number of safety concerns, Articles 42.7 and 42.8 on standing restarts have been rescinded.

Following tests of the VSC system at the final Events of 2014, the introduction of the system has been approved for 2015. The VSC procedure may be initiated to neutralise a race upon the order of the clerk of the course. It will normally be used when double waved yellow flags are needed on any section of track and competitors or officials may be in danger, but the circumstances are not such as to warrant use of the safety car itself. (The full text of the article can be fopund at the end of this article).

When a race is suspended, the pit exit will be closed and all cars must now proceed slowly into the pit lane, not the starting grid. The first car to arrive in the pit lane should proceed directly to the pit exit staying in the fast lane, all the other cars should form up in a line behind the first car.

Team personnel or equipment on grid

If any team personnel or team equipment remain on the grid after the 15 second signal has been shown the driver of the car concerned must start the race from the pit lane. A ten second stop-and-go penalty will be imposed on any driver who fails to do this.

The replacement of a complete power unit will no longer result in a penalty, instead as specified in the current regulations, penalties will be applied cumulatively for individual components of the power unit.

If a grid place penalty is imposed, and the driver's grid position is such that the full penalty cannot be applied, the remainder of the penalty will be applied in the form of a time penalty during the race (not at the next race as was previously the case) according to the following scale:

More than 20 grid places untaken: A penalty under Article 16.3(d) will be applied.

Once the last lapped car has passed the leader the safety car will return to the pits at the end of the following lap, the race director will no longer have to wait for all the lapped cars to reach the back of the pack behind the safety car.

The weight of the car, without fuel, must not be less than 702kg at all times during the Event (up from 701kg).

Changes have been made to the rules governing Wind Tunnel Testing and with regard to the aerodynamic reporting periods for 2015 and 2016.

The Zylon anti-intrusion panels on both sides of the survival cell have been extended upwards to the rim of the cockpit and alongside the pilot's head.