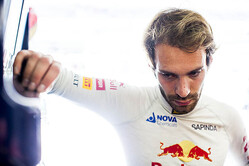 Jean-Eric Vergne has bid farewell to Toro Rosso as hopes of retaining his seat appear to have ended.

Despite speculation that the team might retain the Frenchman, alongside its new starlet Max Verstappen, Vergne bade farewell to the Faenza outfit, via Twitter, this afternoon.

"Despite a good season & 22 pts, I'll not drive anymore for Toro Rosso in 2015," he tweeted. "Thanks for those years. Let's go for another big challenge."

Having lost out when Daniel Ricciardo was promoted to Red Bull to replace Mark Webber, the Frenchman was overlooked again when Daniil Kvyat got the nod in terms of replacing Sebastian Vettel.

With teenage sensation Verstappen drafted in for 2015 it was widely speculated that the Italian team might opt to retain the experienced, and quick, Vergne, seemingly not.

It is not yet known who will line-up alongside Verstappen, though many believe that Carlo Sainz Jr deserves the drive even though this would leave the team with two rookies.