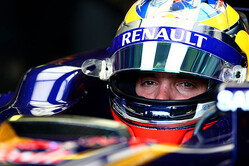 Jean-Eric Vergne: "Today I have absolutely given my maximum to catch the ones in front of me but the pace was just not good enough. It's a shame as our starting position made us think we could have finished in the top ten. We really wanted to score some good points for the final race of the season and we could not achieve our goal. On the positive side, we are still 7th in the Constructors Championship and this is very important for the team. I want to thank everybody, for yet another season together."

Daniil Kvyat: "This is one of those races, in which we were just not able to show our full potential. We were expecting a much better final race but an engine related problem forced me to retire in the early stages. This was unfortunate, because speed and pace were quite good until then. We were fighting with Ferraris and Button and I think we could have finished somewhere around him. Anyway, I have to thank my team for everything they have done for me this year, helping me to grow as a driver and be ready for next year. This has been massively important for me. Looking back to this season, it's a shame that in many occasions we could not show our real potential. I think we would have deserved much better results, but very often we have just been unlucky. Now I am looking forward to this new challenge with Infiniti Red Bull Racing."

Franz Tost (Team Principal): "To start from the fifth and tenth places on the grid and to finish with only one car in twelfth position is certainly not what we were expecting for the final race of the season, here in Abu Dhabi. Both drivers started the race quite well and in the first few laps the speed was good enough for us to keep pace with some competitors around us. Unfortunately, after 14 laps, Daniil Kvyat suffered a technical problem on his drivetrain, which put an early stop to his race. As for Jean-Eric Vergne, we decided to take the risk and go for a three stop strategy, which did not pay off in the end and we would have needed a few more laps to overtake some people in front of us and finish in the points. I would like to thank Daniil and Jean-Eric for what they have done for us this year - I really think we had a strong driver line-up - and congratulations to Lewis Hamilton for his well-deserved title.

"This season is over but now we have to start working towards the next one. Clearly our aim is to improve still further and be more competitive next year. The 2015 Melbourne Grand Prix is just around the corner."

Ricardo Penteado (Renault Sport F1 track support leader): "After a fantastic qualifying session we were all really looking forward to finishing 2014 on a high. But unfortunately Daniil suffered a PU-related issue that put him out early. We'll need to look at the data and find out what happened, but I'd still like to apologise to the team for the problem. Jean-Eric suffered no such problems but didn't quite have the pace to finish in the points. Overall it's been a tough season but we'll aim to come back stronger in 2015."