The thoughts of Montezemolo 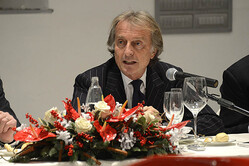 Luca di Montezemolo used his team's media Christmas lunch as a platform to share his hopes for the future, not only of Ferrari but of the sport.

Looking ahead to 2014, which sees the biggest range of technical changes in living memory, he admitted that it will be a year of great change.

"There will be a lot of changes, some strongly supported by us, such as the return, albeit partial at the moment, of testing," he said. "The design of the new powertrain was very demanding, but it's really fascinating.

"It is vital that the factors that make the difference are rebalanced," he continued, "it's impossible for Formula 1 to keep going with aerodynamics counting for 90% of the story. Next year, reliability and the ability of the drivers to manage the race in a very different way to the past will be vital."

He admitted a certain amount of trepidation whilst confirming that, despite assurances elsewhere, that the last few years have been damaging for the sport in terms of spectator numbers.

"I think races will be even harder to follow compared to what they have been in the past," he admitted. "It concerns me that one could see in some parts of the race, that the drivers will seem more like taxi drivers than racers, with all due respect to that role. What happens on track will have to be well explained if we are not to run the risk of seeing the number of spectators decrease still further, both in the grandstands and in front of the television. Is all this a good thing for Formula 1? I don't know. We will see how it goes, however it's important to have some fresh air."

Although one of the few teams with solid financial foundations, Montezemolo is aware of the threat that spending poses to the sport, even though some of his own proposals - in-season testing being a prime example - drive up costs. This, of course, allowed him to link in another favourite topic, that of customer cars.

"We are in favour of a three-year plan to reduce costs, which should be achieved in a gradual manner, taking into account the characteristics of each team," he said. "If someone has no money to do tests then go and do GP2, or basketball or something else. I want to give young drivers opportunities to drive cars. To give more opportunities to the public. Not just the simulator all the time. I don't want Formula One to become equalised at the lowest level.

"It is ridiculous that on the one side you are not allowed to test and on the other you are forced to spend a huge amount on the wind tunnel, which I cannot apply to any of my road cars, which is artificial, not good for the drivers, far from the public, cold.

"The theme of the third car is back in the news," he continued, "for example, we know that there's an American team that would be ready to come into Formula One if it could use one of our cars. On this topic, we cannot disregard the USA when thinking of the future, just as we cannot think of doing without some of the historic races.

"I give a Ferrari chassis to a Chinese team, an American team, an English team... for sure they would spend less than developing their own car from scratch," he continued. "It would be good for sponsors as it would be competitive. And it would be more interesting because after lap three they no more care what those cars are doing. They are sometimes three or four seconds off the pace. The young drivers have no chance to show what they can do.

"I would love to have a North American team with a Ferrari flag, as I'm sure Mercedes would with China. But this is the reason why I have been in favour of a third car - free - for small teams."