Scary moment for Rosberg in Bahrain 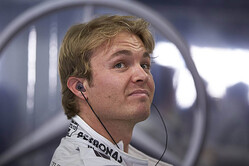 Exploding tyre on final day of Bahrain test has Nico Rosberg reaching for the toilet paper.

Over the last couple of days, Mercedes, Ferrari, Red Bull and Toro Rosso have been carrying out tyre testing at Bahrain as Pirelli looks ahead to 2014.

Having been in the headlines for all the wrong reasons this year the Italian manufacturer is hoping things run a whole lot smoother next year when things will be difficult enough as it is what with the raft of new regulations.

Despite the lack of information coming out of the Bahrain test, this morning Nico Rosberg revealed that the problem of 'exploding tyres' hasn't quite gone away.

"Just spun at full speed 320km/h on Bahrain straight cause my tyre blew up without warning," he tweeted. "Thanks to that need to get some toilet paper now.”

The tweet was subsequently deleted and it remains to be seen whether there is any follow up - no pun intended.

In the meantime, might we remind 'Juan Sheet' to wash his hands and change his overalls… especially in that heat.