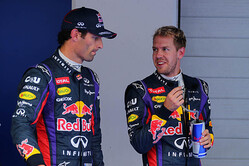 Ahead of their final race as teammates, Sebastian Vettel has spoken of his relationship with Mark Webber who heads off to Sports Cars in 2014.

It has never been the easiest of relationships. Way back in 2007, following an incident during the Japanese Grand Prix - at which the German became the youngest ever driver to lead a Grand Prix - the youngster crashed into Webber whilst running behind the Safety Car.

"It's kids isn't it, kids with not enough experience," said Webber. "They do a good job and then they f*** it all up."

However, amateur footage was to subsequently reveal that Lewis Hamilton was actually responsible for the incident and a grid penalty handed to Vettel for the subsequent race was removed.

Once paired as teammates, it was soon clear that Webber's nose was slightly out of joint, the situation not helped by Vettel's close relationship with Helmut Marko, who had overseen the youngster's rise through the ranks. As Red Bull transformed from the team that put the fun into F1 in to a serious racing outfit, it became clear that Vettel was very much part of the ‘masterplan’.

Incidents such as Turkey 2010 didn't help, the pair colliding and Vettel gesticulating, suggesting that his Australian teammate had lost the plot. As the media picked up on what appeared to be a growing feud between the pair, the team's PR department went into overdrive, issuing a series of cheesy photographs and quotes insisting that all was well.

Of course, Vettel went on to win four titles, and while Webber was up there, certainly in 2010, until he threw it all away with an unforced error in Korea, he was mostly totally overshadowed by his German teammate.

Perhaps the final nail in the relationship famously came in Malaysia this year when Vettel ignored team orders, overtaking Webber to take victory, his first of the season. It was a move which caused a massive split within the team and has left a bitter aftertaste not only with the Australian but with many race fans.

Speaking at Interlagos, Vettel, though admitting that he and Webber are hardly bosom buddies, said he had benefitted from working with the Australian... a comment that is sure to be misconstrued by some of his critics.

"People tend to forget how successful we have been," he told reporters. "I think it has been one of the strongest pairings in Formula One. We didn't have the best relationship on a personal level but I think in terms of working professionally together for the team it has been very strong.

"The fact that he will not be around next year will be a loss for the team, a loss for myself because it has always been a huge challenge," he continued. "I've learned a lot from him, and I can stand up straight and say that there were many, many times and many places where I benefited from him."

However, the Australian cannot expect to benefit from his teammate's altruism - even if he wanted to - Vettel ruling out any hope of gifting a final win to Webber

"I think Mark is a sportsman and he doesn't want a win to be handed over to him," he said. "I think it would be the same the other way around."