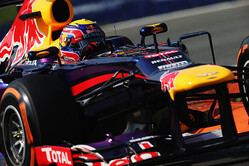 There was stunned silence when Mark Webber defended his start at last weekend's United States Grand Prix in front of a room full of journalists at Interlagos today.

Ahead of his final F1 race, Webber was asked, by former driver turned commentator Marc Surer, if the move to Sports Cars in 2014 would be beneficial in terms of starts, the series opting for rolling as opposed to standing starts.

"I hardly remember a perfect start from you," said Surer. "Can you explain us what is so difficult about starting a modern Formula One car?"

"Austin was very good," replied Webber, the response, other than a few giggles resulting in a stunned silence.

"Sadly the Frenchman behind you got a better start," said Surer, referring to Romain Grosjean.

"That's right," said Webber. "I think that my reaction... first of all, we are not completely in a position like Ferrari with their clutches. We know they have a very very good start system so they're stronger than us on the initial..."

"If you want we can change the downforce..." interjected Felipe Massa.

"With the Pirellis, you slip the tyre a little bit and you lose time so I think that... We've never seen Sebastian go through the row in front either. We're either holding position or losing and Seb has got the starts just OK because I think he can manage some of the problems but for me, it has not, particularly in the last few years. The Bridgestone years we were fine, 2010 was actually pretty good but in the last few years it has not been our strength and it has not been a strength of mine.