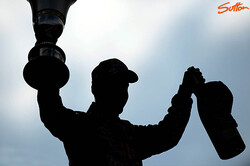 Hopefully it's tongue in cheek, but if not Bernie Ecclestone's latest idea to kick life into the world championship is his craziest yet.

Last year, Ecclestone, like race fans, was spoiled, the world championship going down to the very last race; and what a race it was, with Sebastian Vettel spinning on the first lap and then all that nonsense with the yellow warning lights.

Better still was 2010 when the German went into the last race fifteen points down on championship leader Fernando Alonso who was to see his title hopes disappear along in the exhaust gasses from Vitaly Petrov's Renault.

Better yet was 2008 when Felipe Massa took the title on home soil, only to lose it 38.907 seconds later when Lewis Hamilton crossed the line in fifth following a last lap, last corner, mistake by Timo Glock.

This year, the title was finally won by Vettel at a poorly attended race in New Delhi, though it was effectively decided several races earlier. While the German celebrated with do-nuts, F1 supremo Ecclestone pondered the damage that winning the championship title so relatively early in the season would wreak in terms of falling TV audiences for the three remaining races.

Of course it's not as bad as 2002 when Michael Schumacher won the title with six races remaining, but it's still pretty bad and, as Ecclestone well knows, bad for business.

As ever, much like Baldrick, Ecclestone has a cunning plan, however, we can only hope that he's joking.

The F1 supremo has suggested to Gabriele Cagliani of Expansion, one of the leading economic newspapers in Spain, that he envisages a new points system based on that of the ATP World Tour.

The "last race of the season could be worth 100 points, which would introduce an element of uncertainty," said Ecclestone. While the 'traditional events' would continue to be based on the current system, a win worth 25 points, "the races that would "be worth 50 would be the historically important grands prix - like Monaco and England - while the Brazil race would have a value of 100 points."

As if that isn't bad enough, it is suggested that the powers that be could change the circuits' rankings, in other words, suddenly there are 50 points for winning Abu Dhabi rather than 50.

In our humble opinion, the only uncertainty such a move might create is exactly how many F1 fans would stand for what would widely, and rightly, be seen as a step too far in terms of the manipulation of the rules in order to 'spice up' the show.

If Ecclestone, who is in court today in London, is serious, he deserves 10 years hard labour for even pondering such a pathetic idea.

Though the idea is said to be "far from reality" we all know that Bernie always gets what he wants, and the money makers behind the sport know that winning the title early is not good for business.