Another 60K fine for Williams 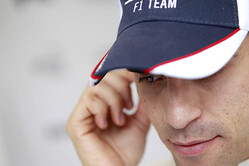 For the second successive race, Williams has been fined 60,000 euros (£51K) as wheelnut issue continues.

Having been fined after Pastor Maldonado shed a wheel during opening practice in Japan, the Grove outfit was hit with another 60,000 fine after the Venezuelan lost a wheelnut on track during today's second session at the Buddh International Circuit.

Williams staff, including Claire Williams, looked on in horror at the car slewed to a halt several corners after shedding its wheelnut in Turn 14.

"Examination of the parts concerned revealed that the wheel fastener had been cross threaded, thus not engaging the primary retaining plunger," confirmed the Race Stewards. "This is a breach of Article 23.12 of the FIA Formula One Sporting Regulations as the car was released in an unsafe condition.

"The secondary retaining plunger failed to keep the wheel fastener in place," they added. "This is a breach of Article 14.7 of the FIA Formula One Technical Regulations."

The Stewards noted that in this case the wheel had been retained on the car (unlike the incident at Suzuka) and that the cross threading of the wheel fastener contributed to the fastener coming off the car.

Whilst the Stewards accepted that improvements to the wheel retaining system had been implemented the team needs to ensure that both the wheel and its fastener are fully retained on the car.

The Stewards decided that a fine of €60,000 was "the most appropriate penalty in this case taking into account this was the second offence, but on this occasion the wheel was retained".