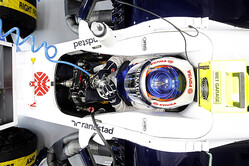 Pastor Maldonado: All the drivers seem to enjoy the Indian circuit due to its fantastic design and high speeds and I will miss it not being on the calendar next year. I particularly like the 180 degree right hander which is taken very fast and seems to go on forever. Of the new generation of circuits this is one of the best with its good variety, combining fast chicanes, slow corners, and corners that require a big KERS input. Normally the track is quite dirty on Friday as the track is not used that often outside of the Formula One race weekend, but it does tend to improve as the weekend progresses with more rubber being laid down and the grip levels vastly improving.

Valtteri Bottas: India is always a unique place to visit and I enjoy the contrasts with other races on the calendar so I'm looking forward to returning again this year. It's a really interesting track to drive and normally produces entertaining races, with a good mixture of corner types that test the car and driver. The track does have some overtaking opportunities because it is quite wide, with the hairpin off the back straight a key opportunity. The weather can also be warm and humid which can be challenging physically. We have not had the sort of results that we would have hoped for so far in the second half of the season, but I will continue to fight as hard as I can and try to get the most out of the package we have to try and get us in to the points.

Xevi Pujolar, Chief Race Engineer: The Indian Grand Prix takes place at the Buddh International Circuit, which was new on the calendar for the 2011 season. With fast, free-flowing and undulating characteristics the track has drawn comparisons to Spa-Francorchamps with the track rising by 14-metres within the first three corners. The track has a mixture of fast and slow corners making it challenging for the drivers, with the multi-apex sequence of Turns 10, 11 and 12 likened to Turn 8 at the Istanbul Park Circuit in Turkey. The Indian Grand Prix features one of the longest pitlanes in F1 and this contributes to a higher than average pitloss which pushes strategies towards fewer stops. Track temperatures are likely to be relatively high and to date there has never been a safety car in the race. After finishing just outside the points in recent races, the team will be pushing hard until the very last race of the season to score a top ten finish.

Remi Taffin, Renault Sport F1 Head of Track Operations: We have learnt a lot about the track in the past two years. It is an interesting circuit, with a variety of corners and speeds throughout the lap. The first part requires good top speed and power since 75% of this sector consists of straights. The second part of the track is twistier and requires a more driveable and responsive engine. However the main feature of the track is the high levels of dust at the start of the weekend, which makes the circuit surface very slippery. To deal with this we will moderate the driver torque maps to give greater driveability and less wheelspin on the entrance and exit of corners to try to extend tyre life.

Paul Hembery, Pirelli Motorsport Director: For India we've nominated the P Zero White medium and P Zero Yellow soft tyres, which we think will be the best combination for the Buddh circuit. For the last two years running we've actually gone for the hard and soft compounds but this year we've gone for a softer choice. As a result, just like the last race in Japan, we're not expecting to see a particularly big variation in lap times between the two compounds. Consequently the strategy made a very big difference and it will be interesting to see if this is the case once more. We only had one pit stop last year, but this year we would expect two - which also provides the drivers and teams with more opportunities. With varying elevations and a wide variety of corners India provides the tyres with quite a test, as there are forces coming from all directions, so tyre management will once again prove to be important.