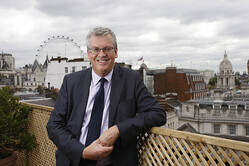 This time last year Britain was still basking in the glory of having had the eyes of the world on it over the summer when the Olympic Games took place in London. Olympic fever is about to rev up again in the run up to the Winter Games which will be held in Russia in three months. Motorsport misses out on this public attention as it is not an Olympic sport but last month the possibility came one step closer.

In September the FIA was granted full recognition by the International Olympic Committee (IOC). It followed a two-year period of provisional recognition and led to the FIA releasing a statement saying that "the IOC decision confirms that the statutes, practice and activities of the FIA are in full conformity with the Olympic Charter, including the adoption and implementation of the World Anti-Doping Code." However, FIA presidential hopeful David Ward has challenged this in a letter to the head of the federation's decision-making body the Senate.

Writing in the CityAM newspaper, Pitpass' business editor Christian Sylt reveals that at the heart of Ward's claim is an alleged lack of disclosure in the FIA's annual financial statements. The accounts for the majority of key European motorsport businesses show what are known as related party transactions. These are payments to and from companies or individuals which are related to the owners or directors of the business. The FIA is an exception as its accounts do not reveal these payments. Ward claims that this is at odds with the FIA's membership of the IOC and on 3 October he wrote to Senate president Nick Craw about it.

He explains that "a key component of the management and avoidance of conflicts of interest is to systematically record all related party transactions. International Accounting Standard 24 on Related Party Disclosures contains the relevant requirements." Craw has responded to Ward saying the FIA's advisers claim that, in fact, it does not need to follow these requirements which are known as International Financial Reporting Standards (IFRS).

"The FIA accounts are fully transparent and are certified each year without reservation by PricewaterhouseCoopers, one of the four major global, independent auditing firms," says Craw. "PricewaterhouseCoopers is perfectly satisfied with the accounting principles used by the FIA and has confirmed in writing that it considers the IFRS standards to not be appropriate for a non-profit organization such as ours."

The FIA has an office in Geneva but its headquarters are in Paris where it does not need to file publicly-available accounts as it is not-for-profit. The accounts are approved by the federation's 236 members at its annual General Assembly and in his letter Ward says "at the many FIA General Assemblies I have attended I can recall a number of occasions when clubs asked for improvements to the transparency of the FIA's accounts."

In response, Craw says that "the FIA has always answered, with complete transparency, any questions that its members have raised regarding the accounts." He adds that "the FIA accounts are fully reviewed by an independent Audit Committee and then by the FIA Senate; the members of both of these bodies having been elected by the General Assembly. Detailed reports are presented by the FIA President and me, as Senate President, to the FIA General Assembly each year when members have (and often take) the opportunity to raise any questions they may have."

The dispute is the latest development in the war of words surrounding the FIA election which takes place in December. Ward recently made a formal complaint to the FIA's ethics committee that current president Jean Todt was campaigning on FIA funds before the start of the campaign period. The complaint was dismissed on Wednesday but other challenges are still ongoing.

Last week Sylt revealed that one of the FIA's founding members, Britain's Royal Automobile Club (RAC), had complained to Todt that "there is a lack of the narrative or detail in the FIA accounts."

Tom Purves, the RAC's chairman, addressed his concern to Todt in a letter dated 25 July which lists several queries about the accounts. Craw responded on behalf of Todt and said that Purves' "assertion of a lack of narrative in the accounts is unfounded. At the time of the approval of these accounts at the General Assemblies, detailed reports were presented by the FIA President on the general situation of the FIA and the major actions deployed as well as by the President of the Senate on the financial documents, including the budget, balance sheet and audit."

Crucially, Craw pointed out that the RAC "was duly represented at the General Assemblies relating to the accounts for 2010 and 2011 and raised no questions. Moreover, the accounts were approved by a show of hands and were thus also approved by your Club."

The RAC declined to comment further and it remains to be seen whether the FIA has managed to shake it off. No doubt Ward will be watching.