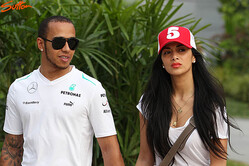 The Formula 1 summer break is always sparse when it comes to news so most of us switch off and try to do something else. If you haven't been paying attention to what's happening or still need your fix, this should bring you up to date:

Adrian Sutil has revealed that he's lost all respect for Lewis Hamilton. Adrian feels that Lewis let him down when he failed to support him during his court case regarding the incident between him and Eric Lux after the Chinese GP in 2011. According to Adrian, despite several agreements from Lewis that they would 'talk' nothing has materialised.

That's not surprising given it's a full time job just keeping track of Lewis and Nicole Scherzinger's relationship. After Lewis dedicated his Hungarian GP win to the singer the speculation is that the relationship is back on. Is it or was that just a desperate plea from a love-sick former boyfriend?

Speaking of loss, Marlboro have cancelled Ferrari's annual Wroom event, with Philip Morris citing "unsustainable costs" as the reason. Does this mean that big tobacco is finally in trouble? Or are they just siphoning off extra money in anticipation of more legislative fights worldwide?

It's no wonder they announced this in the summer break. The Wroom extravaganza is one of the biggest events on the media social calendar and tobacco companies don't need any more negative publicity. Better to try to sneak it in under the radar.

Former Wroom attendee, Tamara Ecclestone no doubt has other things on her mind. Her sister, Petra, had £500,000 worth of jewellery stolen from her house during a bogus viewing. Apparently it remains unreported and will not be claimed on insurance. Probably she's been told by her legal and accounting team that the time spent filling out forms would cost more than the jewellery.

In more positive news, another member of the family, father Bernie Ecclestone, has received a strong boost to his publicity team. As the Formula 1 world awaits news about Bernie's indictment, reigning World Champion Sebastian Vettel has paid tribute to Bernie's impact on the sport, saying he is the one who "brought Formula 1 to such a high level".

And no Red Bull-Bernie PR campaign would be complete without the involvement of PR extraordinaire Christian Horner, who added that he hopes Bernie will go on "for a long time to come" because he is the reason the F1 business is what it is today.

Business eh, Christian? we thought there was a pact amongst the mighty and powerful in Formula 1 to delude fans into thinking it is a sport.

One can understand Christian's distraction, though, what with all the applicants for the other Red Bull seat in 2014. At last check there was Kimi Raikkonen, Daniel Ricciardo, Fernando Alonso and Jenson Button.

That possibly explains Christian and Flavio Briatore's inability to get their stories straight. After Flavio adamantly declared that Alonso has no interest leaving Ferrari for the Red Bull seat, Christian said that, in fact, the meeting he had in Hungary with Alonso's manager was about Alonso rather than Carlos Sainz Jnr as widely speculated.

Meanwhile, the current occupant of that seat, Mark Webber, has voiced his criticism about the number of pay drivers in Formula 1. In an interview with Autosport he compared the drivers at the rear of the current grid unfavourably to the depth when he started racing.

Efforts by the FIA Institute to rectify this problem are underway. The FIA Institute Young Driver Excellence Academy, a program aimed at developing young driving talent worldwide, is undergoing its 2013 selection process. Applications for the African Selection rounds are now open.

Russia is working on its own solution. In recent days, reports have emerged about two young Russian drivers aiming to get into F1. The father of Artem Markelov, currently competing in the German F3, has links to the ownership of Russian Time, a GP2 team, which in turn apparently has links with Williams. And Oksana Kosachenko, Vitaly Petrov's former manager, has indicated she has two Russian prospects including Nikolay Martsenko, currently in Formula Renault 3.5. No major leaps there.

This of course comes in the wake of the announcement that Sauber's agreement with several Russian organisations includes a race seat for Sergey Sirotkin in 2014. Nobody is quite sure what's happening with that. Speculation has extended to the possibility that Sauber are still in danger of folding before Spa as Ferrari are threatening to cut off engine supply until Sauber pay the £9 million they owe. At the other end of the scale is the rumour that Vladimir Putin has to sign off on the Sauber deal.

Putin has certainly had his fair share of motor sport headlines lately. He was front and centre when DTM qualifying had to be halted due to the airspace being reserved for his jet. As the medical helicopter couldn't fly, the organisers had no choice but to delay and then cancel the event.

And that makes us think that F1 does indeed need Bernie, if only for the amusement of watching a battle of powerful billionaires during the F1 event at Sochi next year. Although we don't know what's going on with that, either, because the organisers missed the filing deadline.