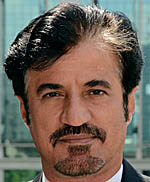 Dr. Mohammed Ben Sulayem has been appointed by the FIA to chair a new task force charged with the responsibility to build a ten-year plan for the sport's global development. It will be the first such plan in the 109-year history of the FIA.

Sulayem, President of the Automobile and Touring Club of the UAE and the FIA's Vice President for sport, commences his work as chairman of the new Motor Sport Development Task Force this week, starting a consultation process with motor sport stakeholders.

The process begins when he meets senior officials of the North and South American member clubs of the FIA at their Latin American congress in Buenos Aries, Argentina from 1-3 August.

Sulayem will also consult with the African member clubs at a meeting in Botswana from 28-30 August before briefing the World Motorsport Council on progress at its September meeting in Croatia, when the other members of the task force will be nominated.

Over the next few months, the task force will consult with more motor sport stakeholders, including manufacturers, the media, promoters, fans and other FIA member clubs around the world.

A strategic plan to develop and grow motorsport in a sustainable manner over the next ten years will be presented to the FIA General Assembly for approval at the end of 2014.

"To develop an effective plan, it's vital to have full consultation with all the main stakeholders, and allow them to have a say in the way motor sport is developed over the next ten years,” said Sulayem.

"We will also be conducting research into global economic and sporting trends to help develop a precise picture of what is needed to drive the growth of motor sport in the immediate future.

"It is clear that much of this growth will come from the emerging markets, in particular Asia, as with all business. But in order for motor sport to prosper on a global basis, we must first ensure that the foundations are secure at national and regional level.

"This is why I am keen to be starting the consultation process with the FIA's members clubs, to hear about the problems they face, and discuss what help is most needed to take motor sport forward."

Sulayem, the first Arab to be elected to the World Motorsport Council, has established the ATCUAE as a leading national motor sport authority, with acknowledged expertise in associated training, research and education, since taking charge of the FIA's representative club in the Emirates in 2006.

He said: "I took the job to chair the Task Force because it is a big challenge, not only for me, but also the FIA. It will provide the road book for the FIA to grow and develop."