Montezemolo: We want to win! 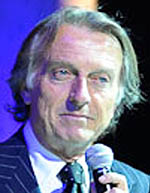 Still smarting from last gasp defeats in 2010 and 2008, Ferrari president Luca di Montezemolo has sent out a rallying call to his troops ahead of the season finale.

"We can be proud of what we have achieved so far," wrote di Montezemolo in a message to all team members. "For the past sixteen years, with very few exceptions, we have got used to reaching the final stage of the championship in this situation and here we are again this season, so that whatever the outcome, we have been contenders.

"However, pride is not enough: we want to win," he continued. "Yesterday in Austin the team once again did a perfect job as indeed did both drivers; Fernando made it to the podium yet again and Felipe drove a fantastic race, apart from also demonstrating once again that he is a team player.

"Now we go to Sao Paolo, Brazil with the will to win, knowing that we will fight for it right to the last kilometre of the last lap of the race at Interlagos. I know it will be very tough, but I and all of us believe we can do it!"