"We have ten crucial days ahead," declares Montezemolo 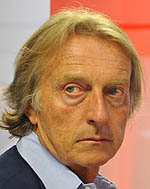 As his driver claws back three valuable points from Sebastian Vettel's championship lead, Ferrari president Luca di Montezemolo attempts to rally the troops whilst warning them that time is running out.

"The weekend was hard to read," he told his team's website. "That began with Saturday evening when I watched a situation that was not entirely clear. As far as Ferrari is concerned I want to understand why the new parts that we brought to the track only partially improved the performance of the F2012, which wasn't enough to allow Alonso to fight for the very front positions on the grid - despite the contrasting expectations of our engineers.

"Yesterday Fernando nonetheless produced his umpteenth great race of the season," he continued, "in which he again gave 120% and he managed to fight for victory right to the end.

"But it's clear that we have to do more for the coming races. That is what I requested today of Domenicali and his team: we have 10 crucial days ahead, during which we must do everything to arrive in Texas with a car that can fight for the victory. Words count for nothing: this must be our target.

"To start sixth and finish second, despite only benefiting from one retirement from another car, clearly shows the pedigree of Fernando's race yet again," he said, referring to yesterday's race. "Of course, yesterday morning we were all hoping to gain back a few more points in the championship given Vettel's starting position. Instead he produced a fine race too, even if the two safety car periods certainly didn't help us...

"Nonetheless I remain confident because everything is possible," he concluded. "It depends on us: yet again in these last 15 years we are involved in the title battle right up to the end and we have seen how much more difficult situations in the championship standings have been overturned. It's up to us not to leave any stone unturned: I am certain that the will to win drives the men and women who work for Ferrari and that everyone will work with absolute determination, giving the same 120% that Fernando keeps on giving.

"We want to win the World Championship - just as we have done this year in many Gran Turismo title fights thanks to the mighty 458 Italia, beating the most important constructors: I believe in us more than anyone."