So that's a no then Seb? 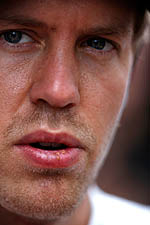 With sections of the media still refusing to take no for an answer, Sebastian Vettel attempts to give the definitive response in terms of a move to Ferrari in 2014.

For as long as anyone can remember, the German, like most hot young talents, has been linked with an eventual move to Maranello. However, a few weeks back, the BBC revived the story claiming that a deal had been done which would see Vettel at Ferrari in 2014.

Then, for some unexplained reason, it was revived over the Indian Grand Prix weekend.

First off, Christian Horner was asked by Sky Sport F1's Martin Brundle if Vettel would still be part of the Red Bull team in 2014, the Englishman was in no doubt that he would. Subsequently, a similar question was put to Vettel himself, this time by Sky Sport F1's Ted Kravitz. Asked if he could deny he had signed a pre-contract agreement with the Italian team, the German said "Yes, I can deny. I don't have any agreement or obligation."

However, some simply don't know when to leave alone, and consequently when Vettel was asked about Ferrari in the post-race press conference his response was a little more forthright.

"This could be quite funny now, what I say..." began the German. "No, there's nothing, nothing to tell you, nothing I've signed.

"Nothing has changed," he continued. "It's quite amusing. I don't know where it came from but... I don't read much, so it's quite a surprise when you get to the circuit and get all these questions. Nothing to report. As I said, I can't be happier at the moment, I'm very happy with..."

And then, after a brief pause, he continued: "Actually, there's one thing I would like to say about this. As I said, there's no reason to write anything or report anything but obviously, as I said earlier, you don't know every single one in the team, and it's hard to speak to every single one, so if there's - sorry to say - some bullshit in the press, obviously there might be some concerns back in the factory, but I'm 100 percent behind them as I feel they're 100 percent behind me and therefore I want to get this straight: there's nothing to report and I'm very happy at Red Bull Racing."