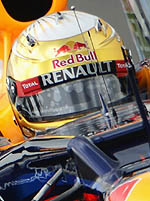 Sebastian Vettel: "All in all, it was a very good race for us and I'm happy with the result. I had a good start, Mark had a better one and it was close in Turn 1, but I had a good exit from Turn 3 and got ahead. I was able to open a gap, which was important. I felt very good on the soft tyres and was competitive, I could have stayed out even longer I think, but at some stage you have to cover. McLaren and Ferrari were quick on the hard tyre today, so it was important to have a gap to them. I saw some sparks at the end from the car, but we saw a lot of cars throwing sparks this weekend, and we joined them. It was a great day for us and an important step."

Mark Webber: "We had a KERS issue that we had to manage. It's maybe hard for people watching to know what it affects on the car, its power on the straight obviously, but also managing brake balances and those sort of things. The guys were trying to help me get the KERS to recover and were talking with me on the radio. In addition, when you have a one-stop race, it's always a chance you have a front-right lock up. As the fronts are very important you need to look after them which can affect the rhythm a little bit, but I tried to stay as cool as possible. Overall, I was pretty happy with how I drove; we should have finished further up the road, but it's the way it was today."

Christian Horner, Team Principal: "A fantastic performance by both drivers today. Sebastian drove an immaculate race and really controlled the race from start to finish, leading every single lap. Mark initially settled into what looked like a comfortable second, before we started to experience problems with the KERS around lap 20. We had to turn the system off initially then reinstate it in a reduced state of power, which unfortunately allowed Fernando get close enough after the stop. We saw the DRS was particularly powerful here. Mark drove incredibly well to keep Hamilton behind him for the remaining laps. We finished three points off a maximum score in the Constructors' Championship, which consolidates our lead, while Sebastian pulled out a further seven points on Fernando in the Drivers'. With three races to go, we still need to take every race one at a time, but it's fantastic to win for a second time in India and it's remarkable for Sebastian to have won four races in succession. He's led every single lap of the Indian GP since it started in 2011."

Cyril Dumont, Renault: "Again, an incredible race today and it was a good showing from both drivers. It was a shame that Mark had a KERS issue during the race as we could have maybe got a one-two again this weekend. Renault has something to celebrate again today, as we got our 150th win after achieving our 200th pole at the last race. I would like to congratulate everyone from Renault and Viry-Chatillon of course and from Mecachrome, as from nearly 500 races we have won 150, which is a strong rate. A big thank you and congratulations to everyone involved"