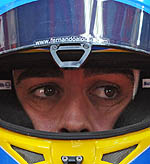 Two Ferraris on the third row: that was the outcome of qualifying for the Indian Grand Prix. In Q3, Fernando Alonso was fifth fastest, Felipe Massa sixth. Both drivers got through to the second part of the session using just one set of Prime tyres in Q1 and then moved forward fitting two sets of Options. In Q3, Fernando first did a timed lap on a used set and then took the third new one he had available; Felipe on the other hand opted to just make a single run on the third set of Pirelli Softs.

Stefano Domenicali: "We were hoping to be able to start from the second row: that was our target. We didn't manage it and that will make our race more complicated but it does not mean we have given up hope, far from it. As usual, tomorrow's race will be long and tough on a track where overtaking is possible and where maybe, we could witness some different strategy choices to usual. Yesterday, we saw our race pace was reasonably good, but the others certainly didn't seem to be lagging behind in this respect. Reliability, teamwork in the pits and on the pit wall, the start: the deciding factors will be the usual ones. We know it's going to be hard and we will do our utmost to bring home a good result which will allow us to keep pursuing our objectives for the season."

Fernando Alonso: "We tried to get the most out of what we had, but there was no way we could be ahead of the Red Bulls and McLarens. In the end, fifth place is not so bad, because it would have been easy to end up even further back if anything had gone wrong. Clearly, finishing ahead of Red Bull is our aim, but today it was impossible to fight them, at least in qualifying: when we had a similar car, it was possible to fight with Vettel and we have even been ahead of them, but now we are fighting against Newey and, at the moment we cannot match him. We brought some updates here which have worked as we expected, but the others have also improved over these past two weeks: it's down to us to bring something more significant for the final three races. I am not concerned nor demotivated, because I know that things can change very quickly and that high spirits on Saturday can easily turn to sadness on Sunday. We must try and make up places on the first lap and try to put pressure on our main rivals, ensuring they don't have an easy race. There are sixty laps to work with and we will need to tackle each one as if it's qualifying, by attacking. Clearly I hope I can soon have a more competitive car to try and fight them on equal terms on Saturday and not just on Sunday. I definitely am not the sort to give up and that's my real advantage."

Felipe Massa: "I am reasonably pleased with sixth place, even if maybe, but for a mistake at Turn 6 on my run in Q3, I could have started from further forward. In Qualifying Red Bull is faster, while McLaren was only just ahead and then it's us: in the races, things are a bit different and we hope we can fight with these four cars for the top places. There are many key points for tomorrow: the start, strategy, tyre wear and not making mistakes. We will need to be very focused because it will be a very long race. Today, it wasn't easy to put together the perfect lap, partly because the track surface was still quite slippery. We have brought updates here which seem to work, but maybe it's not enough to be ahead of our closest rivals."

Pat Fry: "We were hoping to at least get our cars onto the second row, but we did not hit our target, even if we did get close. The result reflects our current potential, but in order to be where we wanted and where we were capable of being meant we needed to be perfect today and we weren't. Sure, we want to have the quickest car of all and we are not there yet. We brought some updates for the car here: nothing revolutionary but it did produce a step forward, otherwise we would have been even further back, given that all the top teams are pushing to the maximum on development. Tomorrow's race looks like being very interesting, partly because tyre degradation seems lower than usual. We must try and do everything perfectly to stay in the fight for the title right to the end. All of us, here at the track and back at the factory, are pushing as hard as we can to try and give our drivers the best car possible."