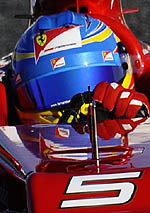 Scuderia Ferrari has a further twenty four points to its name after the Abu Dhabi Grand Prix, thanks to a second place for Fernando Alonso and a seventh for Felipe Massa. This is Fernando's eleventh podium finish of the season, the twelfth for the team. The Spaniard has reduced the gap to the series leader to ten points, while with his eighth consecutive points finish, his twelfth of the season, Felipe has moved up to seventh. Ferrari now has a 22 point advantage over the third placed team in the Constructors' classification, 82 points off the leaders.

Stefano Domenicali: Yet another great race from Fernando in what is an amazing season for him. Today's second place came about mainly because of his ability to get the most and maybe even a bit more than that out of what we gave him to work with. The gap to the leader in the classification has come down to ten points and everything is still up for grabs. Of course, we must do something extra and better than what we have done to date to give him a more competitive car. If we had been offered this gap on leaving Abu Dhabi, immediately after qualifying yesterday evening, maybe we would have taken it, but it's also true that this afternoon, before the start, our prospects had changed. Definitely, the way the race played out and the incidents that occured, did not do us any favours in light of the championship, but these are circumstances over which we have no control. The important thing is we have reduced the gap in the Drivers' classification in a Grand Prix that was particularly difficult because, not only did our performance level not match that of our closest rivals, but it was actually worse than that of other teams. On top of that, we have increased our lead over our closest rival in the Constructors' championship, which is a good thing. Ten points is a lot but it can also be seen as very few. We have a duty to try right to the very last metre of the final Grand Prix and that's what we will do, you can be sure of it.

Fernando Alonso: I'm happy with the way this weekend turned out. It's true that with Sebastian last, there was an opportunity to reduce the gap more significantly but it's equally true that our performance and our grid position could have seen us lose points in this Grand Prix. I repeat, they have the quicker car, we have the better team. Everyone fights with the weapons they have at their disposal: we will not manage to turn our car into the quickest of the pack with a wave of a magic wand, but we will counter their performance with the perfection of our team. The simulation put us somewhere between fourth and sixth and we finished second, therefore once again this was a more than perfect race, running at the maximum from start to finish. Sure, there were a number of unexpected retirements and two neutralisation periods that did not really come at the right time or suit us, but these are things beyond our control. We just had to stay focused on our race and that's what we did. Now we go to Austin, a new circuit for everyone: we have just had a taste of it on the simulator, but the track is something else. Let's hope we can get a good result and put on a good show in an important country like the United States. Tonight I will go to sleep thinking the glass is half full rather than half empty. We must be proud of what we have done, the work of the mechanics at the track and the engineers who tried to fine tune the car. I fought from start to finish: first with Maldonado, then Jenson and, in the end I tried to go and catch Kimi. I could not relax for a single lap. The best race of the year? It's still to come...

Felipe Massa: It was a difficult race for me. In particular, I suffered on the Softs because of more degradation than we had expected. On Friday, the long run seemed much better: we must understand what changed compared to two days ago. I had problems with the balance: understeer in the fast corners and oversteer in the slow ones. The duel with Webber was the vital moment, as it meant I lost a lot of places at a crucial point in the race. He tried to go round the outside of me and we touched. Then he cut the chicane and came back across the track, forcing me to spin to avoid hitting him. A shame, because I could at least have finished ahead of Kobayashi. In any case, I managed to bring home some points which are important for the Constructors' championship, as we have increased our lead over McLaren. At the next race, I too will have the technical updates that Fernando had here and we hope there will also be other ones to improve the car's performance. However, it's true that the track characteristics can alter the balance of power: here we saw that McLaren and Lotus were very strong, apart from Red Bull of course, but it's not certain that elsewhere it will be the same.

Pat Fry: It's been a difficult and intense weekend and coming out of it having improved our situation in both championships compared to the start of it is undoubtedly positive. There's no point brooding over what happened: the Safety Cars did not come at the best times for us, but there was nothing we could do about it. We had to do our utmost and, on that front, we've got nothing to reproach ourselves for. Once again, Fernando delivered an amazing performance, getting everything he could out of the car, both in qualifying and in the race. When strategy does not allow for many variables it's always difficult to make up places but this evening and eight days ago in India, he showed what he's made of. These two second places are worth much more than the 36 points they have brought him. Felipe had a more difficult race than his team-mate, losing precious time because of the spin, as it left him in a lot of traffic. However, his six points are valuable for the Constructors' classification. Once again in this Grand Prix, our race pace was better than in qualifying: we have to make a step forward in this area to try and be in with a chance in the last two Grands Prix of the season. We had various updates at this race which, to some extent, did not work as we had expected. We must understand why and do something quickly because we no longer have much time. Furthermore, these ten days prior to the final double header will be crucial to prepare for a Grand Prix that takes place on a track that is new for everyone. Whoever is quickest at adapting their car to it could have an advantage. None of us wants to give up and everything is still possible.