Massa gets a grid penalty 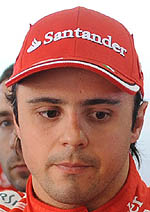 In a move that some might see as, ahem, gamesmanship, Felipe Massa has taken a five place grid penalty after Ferrari broke the seal on his gearbox.

The Brazilian, who yesterday out-qualified his Spanish teammate for only the second time this season, therefore starts from eleventh on the grid.

However, this means that Alonso moves up to seventh on the grid, having already gained a place following Grosjean's penalty, which means - surprise, surprise, he starts from the clean side of the grid.

According to the stewards, Ferrari broke the seal on Massa's gearbox, a breach of Article 28.6e of the FIA's 2012 Sporting Regulations.

"According to article 28.6e of the 2012 Formula 1 Sporting Regulations this is deemed as a gearbox replacement and this replacement took place before the end of five consecutive events," read an FIA statement.

"As this is not in compliance with Article 28.6 of the 2012 Formula 1 Sporting Regulations, the driver should drop five places on the starting grid at this event and I am referring the matter to the stewards for their considerations."

“We accept the penalty for the gearbox change,” Ferrari’s Communications Manager, Luca Colajanni told Sky Sports F1, explaining the decision, "which is five grid positions. This decision was taken to maximise the potential at the start for Fernando, which is normal in a way, because it was seen yesterday that starting from the dirty side of the grid is very poor. Fernando is fighting for the championship and we need to do all the best we can to help him in this fight.

There is speculation in the paddock that Mark Webber might also encounter a gearbox problem between now and the start of the race.

One of the first to react to the move was the FIA's Gary Hartstein, who tweeted: "What a typically cynical manipulation! Rules are rules but we're seeing cleverness trump sportsmanship... once again."

This is not the sort of thing the sport needs as F1 attempts to win back America.