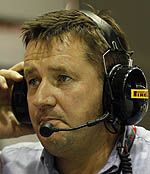 Reigning world champion Sebastian Vettel claimed his first pole position of the year at the Bahrain Grand Prix with a time of 1:32.422: the fastest lap of the weekend so far, using the P Zero Yellow soft tyres. With eight different teams in the top 10, pole position hung in the balance until the closing seconds.

As expected, temperatures were dry and warm during qualifying at the Sakhir circuit, which challenges the rear tyres in particular as they have to generate traction on a wide variety of medium-speed corners, which are frequently made dirty by sand on the track. This meant that lap times improved dramatically as qualifying went on during the afternoon, which caused some big surprises as teams judged the compromise between saving tyres and posting competitive enough times to get through.

Ferrari driver Fernando Alonso was the first of the top runners to move onto the P Zero Yellow soft tyre in Q1, with the fastest time set by Sauber driver Sergio Perez.

All the drivers apart from Force India's Nico Hulkenberg started Q2 on the soft Pirelli tyre, while Caterham's Heikki Kovalainen - who did an excellent job to put the team into the second session for the first time - completed just one run at the end on the P Zero White medium tyre.

The Red Bulls and McLarens went out for two runs in Q3, using the soft tyres on each occasion. Vettel claimed pole on his final run, clinching it by less than a tenth of a second from McLaren's Lewis Hamilton. Mercedes driver Nico Rosberg completed just one run at the end on the soft tyre to qualify fifth, while Toro Rosso's Daniel Ricciardo qualified in a career-best sixth. Alonso and Di Resta did not set a time and will start ninth and 10th respectively, with a choice of compounds to begin the race with.

During the final free practice session this morning, Michael Schumacher was the first Mercedes to go fastest on the soft tyres, followed by his team mate Rosberg, who set the fastest time of 1:33.254, just ahead of Vettel.

Paul Hembery: "We've seen a great job from Sebastian Vettel and Red Bull, who demonstrated their ability to get the most out of the tyres by extracting every last bit of performance from the softer compound. With the whole field having closed up considerably in terms of pure pace this year, every single advantage that any driver finds is magnified - which means that tyre strategy becomes all the more important. That strategy also influences qualifying, with about 18-20 laps expected for the soft tyres in race conditions and 23-25 laps for the medium tyres. We can expect three stops for most of the leading runners, although some may try two depending on which compound they favour. Degradation is more or less where we expect it to be, given track temperatures in excess of 45 degrees centigrade. In terms of the speed differential between the tyres, we're still expecting 0.6-0.8 seconds between the two compounds or maybe a bit less. Tyre degradation is certainly going to be an important factor in the race tomorrow, but managing the tyres correctly presents another important opportunity for this extremely talented grid of drivers to demonstrate their skills."