Tyres remain the issue for Ferrari 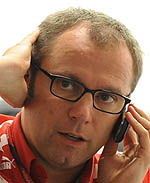 Of the seven Bahrain Grands Prix to date, Ferrari has won four of them, however, the Italian outfit admits it is unlikely to add to its tally this weekend.

That said, though the Maranello team admits it is difficult to see how it can expect a different scenario to the one witnessed in Shanghai, this does not mean that the team heads to Bahrain resigned to its fate; quite the contrary.

Even though there are no updates on the F2012 and the Sakhir track characteristics seems purpose made to highlight areas, traction and top speed, in which the car is far from brilliant, the team is determined to do its utmost to bring home a good result and thus end the 2012 season's opening run of races in the best way possible.

"We knew we would have problems in Shanghai and Sakhir," admits Stefano Domenicali. "Of course, we're unhappy at not being able to bring home the points tally we could have done in China. I think we had the potential to at least get Fernando into the top five and Felipe into the points, but both of them spent almost all their time in traffic and, especially in the Spaniard's case, never managed to lap consistently with a clear track ahead of them. As a result of the lack of top speed, Fernando therefore had to try and overtake at other parts of the track and take risks. In Bahrain, we will try and limit the damage more effectively, as we did not manage to do so in China. Above all, we will have to get the most out of the tyres, both in qualifying and in the race."

In Sakhir, Pirelli is supplying the same compounds used in Melbourne and Shanghai, soft and medium. In China tyre behaviour was unpredictable, mainly due to the fluctuating temperatures. The most striking example came during qualifying, but there were also a few surprises thrown up in the race, not just from team to team, but also between drivers in the same team. "Understanding when and how much can be got out of the tyres has been the key factor to this first part of the season," said Domenicali. "It can make the difference and we must improve our ability to analyse and predict their behaviour."

Despite a particularly difficult start in terms of level of competitiveness, Fernando Alonso is third in the Drivers' Championship, eight points off the lead and with the same points 37, he had two years ago at this stage, in a season where he ended up heading into the final race leading the championship. "This has to be a stimulus to further speed up our car development," said Domenicali. "The real contest in these weeks is the one taking place in Maranello, where everyone is pushing strongly to try and find any available hundredth of a second in performance terms, in every area. We will have a few new things in Mugello, but we will take right up to the last available day prior to the Spanish Grand Prix to introduce the very latest updates. I am sure that our rivals will also be doing the same, so it will be a case of showing that we can be cleverer than them and do a better job."