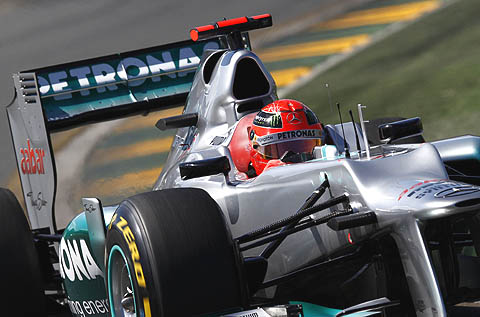 Two races into the 2012 season, and firm conclusions are very hard to come by when assessing the true competitiveness of the teams. The results from the first two races indicate that this could be one of the most open seasons for years, with seven different teams finishing in the top ten in Melbourne - and nine in the mixed conditions of Sepang. Even in qualifying, the margins are incredibly close: the top ten qualifiers from Q2 at the first two races were separated by an average of eight-tenths of a second, compared to 1.5 seconds in the first two races of last year. In such a tightly matched field, small details make a huge difference.

For Mercedes, the time between the races in Malaysia and China has been spent trying to unravel a conundrum: why hasn't strong qualifying speed been translated into a similar level of competitiveness on Sundays?

"In both races, our problems have been related to getting the tyres into the correct working window," explains Ross Brawn. "However, at each race it was at different ends of the scale: in Melbourne, we overheated the tyres - it was under control on Friday, then we developed the set-up in a direction which did not prove helpful in the warmer conditions. In Malaysia, having done a lot of work in practice to make sure we didn't suffer from the same problem, the cooler conditions on Sunday dropped us out of the window again."

Temperature readings give a clearer picture of the shift: while on Friday and Saturday, track temperatures were in the mid-40s in Sepang (peaking at 45 degrees C on Friday), they hovered around 30 degrees C in the race. "In the dry at the end of the race, we got the car working more effectively and our pace was more respectable. But I still don't feel we really got the tyres working well, gripping hard and operating at optimum temperature."

The consequence of the drop in temperatures was to flip the primary challenge of the race on its head: instead of needing to protect the tyres from overheating, it was critical to generate tyre temperature in the cooler conditions. More than one team experienced a loss of relative competitiveness compared to Saturday. "The result in Malaysia was a great one for Formula One - but certainly not what would have been predicted before the start," continues Brawn. "Like other teams at the front of the grid, we spent two days getting tyre temperatures down - and then, in the race, found that we needed to work the tyre harder. The cooler conditions reversed what was needed from the cars."

However, circumstance alone does not explain the team's difficulties at the opening races of the season. "We have too narrow a window in which we are operating the car - and we have to broaden that, and build more tolerance into how we are using the tyres," explains Brawn. "When we encounter challenges like this, we look at all areas of the car and we challenge ourselves collectively to find the solutions we need. But our qualifying speed tells us that the fundamentals of performance are there: you can't do the lap times if you don't have enough downforce, horsepower or a good chassis."

So far, the potential of the F1 W03 has only been glimpsed on Saturday. At both races, the best of the team's cars has qualified less than half a second from pole position - in 2011, the closest the team got to pole was 0.525s in Turkey. The step forward in basic performance is clear to see and there is no reason to believe that it cannot be translated to race conditions.