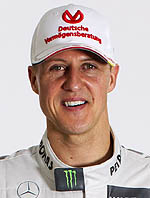 Starting from third, Michael's car was touched on the first lap leading to a spin which dropped him to 16th at the end of lap one. The rain falling prior to the race increased in intensity from lap four and led to a red flag on lap nine and a 51 minute delay. After the restart, both Michael and Nico struggled to get the best from their tyres and were not able to fight for positions. Michael stopped on laps 5, 14 and 39, with an intermediate/wet/intermediate/prime tyre usage. Nico stopped on laps 5, 13, 26 and 39, with an intermediate/wet/intermediate/intermediate/prime tyre usage.

Michael Schumacher: "From where I started the race, it's a real shame to grab just one point at the end today, and of course I would have wished for a better finish for our team after their hard work. However I was touched at the back soon after the start and the car spun which really decided my afternoon. During the first part of the race, I just tried to stay on track as you couldn't see anything, and it was the right decision to halt the race. After the re-start, the pace wasn't that far off but it was the same for a lot of teams so there was no way to gain positions. It's clear from today that there is still a lot of work for us to do to take our pace from qualifying into the race, and I am sure the guys are already thinking very hard about finding a solution. But this will not be done from one race to another, it will take some time, and we need to give it that time. Still it is a fact that we have improved, so I can fly home now being sure about this and looking forward to fighting in the races to come."

Nico Rosberg: "That was an unlucky day for me after an eventful race. I had a good restart and because of a good strategy I was in fourth position. But then I had problems with my intermediate tyres; the degradation was very high which forced me to do another pit stop for a new set. The positive thing is that on my last stint with the slicks, I had good pace and because of my tyre management, I was able to beat Jenson. We are strong in qualifying but not yet in the race, and we need to work on that before the next race in China."

Ross Brawn: "It's a very disappointing end to what had been such a positive weekend here in Malaysia. Clearly we have a conundrum with this car that we have to unravel. After such an encouraging qualifying session, and indeed the fuel runs that we did on Friday, we struggled to get the tyres to work properly in the race today. There were little windows when we seemed to get them working and other times where we fell out of them completely. I don't believe that we are abusing the tyres, just not using them properly, and it's a problem that we have to solve if we are going to move forward with the car. It is especially disappointing after the potential we have shown, however I am confident that we have enough strength and the right people to unravel the problem. We will be getting our heads down back at the factory next week and doing just that."

Norbert Haug: "From P3 Michael did not have the best start but was still in a top five slot when he was spun around during the first lap and passed the start and finish line in P16. After the restart, things did not go any better and we never really could cope with the wet conditions and the drying out track on which nobody has had the opportunity to test before the race. Other teams could obviously handle these mixed conditions better and all credit to them. Both Ferrari and Sauber did a great job today so congratulations to those teams, Fernando Alonso and Sergio Perez. We obviously did not have the set-up to make the best out of these tricky conditions today. We brought Nico in and put him on slicks which was a calculated risk that finally did not pay off. Our car has got speed and we will continue to work hard to generate this speed in the race as well as in qualifying."