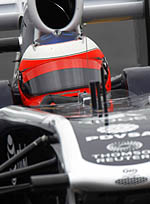 Rubens Barrichello and Pastor Maldonado again claimed places just outside the top ten in today's qualifying shoot out for the Japanese Grand Prix. Rubens' time of 1:33.079 and Pastor's 1:33.224 will see them line up alongside each other on Sunday's grid, in P13 and P14. Both drivers recorded their fastest time on Pirelli's soft Option tyre.

Rubens Barrichello: First of all I want to thank the team for working so hard on making the changes I wanted. The car wasn't behaving well in practice this morning so we changed almost everything on it before qualifying. Everyone did a great job turning it around in time. The changes really transformed the car and we pulled off a strong lap this afternoon.

Pastor Maldonado: Quite a difficult qualifying for me, primarily because we lost a lot of track time during yesterday's practice. We made a few changes after this morning's session and we managed to get a good lap out of the car in qualifying. I don't have the balance I'd like, but we have time go through everything and do some more work ahead of the race.

Mark Gillan, Chief Operations Engineer: It was good to get through the entire run plan in P3 after a difficult day yesterday. Rubens was initially unhappy with the balance on his car after it had to be almost completely rebuilt after his crash in P2. The crew did an excellent job to make a number of changes between P3 and qualifying and Rubens had a very good lap this afternoon which placed him in 13th. With limited running in practice, Pastor also did really well to learn the circuit as quickly as he did and pushed hard to get 14th.