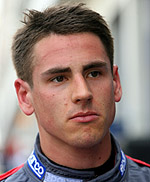 Ahead of today's sole free practice session, the air temperature is 24 degrees C, while the track temperature is 28 degrees. Though it is bright and dry, there has been heavy overnight rain, therefore the session has been declared wet - which will add to the excitement.

For various reasons, several drivers, including Lewis Hamilton, had limited track-time on Thursday, therefore we can expect a busy session this morning, especially with the threat of rain still hanging over the Principality.

Also, Renault is expected to be running a new front wing today, which will be making its track debut.

As Schumacher, Trulli and Liuzzi leave the pits, getting the session underway, Kimi Raikkonen is still making his way to the Ferrari garage, looking as relaxed as ever and living up to his 'Ice Man' moniker.

Just three minutes into the session and all but Massa, Kimi and Barrichello have been out, keen to explore the track conditions. Coulthard gets it all wrong at the Nouveau Chicane, scene of several slip ups on Thursday. Undaunted, the Scot continues around, seemingly destined to be the first driver to post a time. However, at the end of his second lap the Red Bull driver, who lock-up again, this time at Casino, dives into the pits, where the remaining 21 drivers are waiting for conditions to improve.

Ten minutes into the session, Nick Heidfeld heads down the pitlane, however, after a tentative exploratory lap he too returns to the pits. And now we can see why, it has started raining, and quite hard too. In the grandstands the umbrella go up while some spectators don their pack-a-macs. In the Ferrari garage Raikkonen appears to snuggle down into his cockpit, as if to say; "it's too wet to go to work".

Davidson goes out, knowing that should these conditions continue for the remainder of the weekend, or even parts of it, he could well be standing on the podium tomorrow… stranger things have happened here.

As the Englishman returns to the comfort of the Super Aguri garage, Tonio Liuzzi goes out to try his luck. The Italian, quite wisely, tip-toes around the Principality. Back in the Toro Rosso garage Scott speed is asked if he wants to try a couple of laps; "I think I'll let him do it," he says of his teammate, "and see what he says". Before the team can say another word to the American, Liuzzi's voice rings out over the radio; "It's not good out here," he tells them, "I'm aquaplaning all over the place". "OK, come in," they wisely tell him.

Sure enough the car is all over the place, particularly at Mirabeau and the Nouveau Chicane.

Sensing a historic win, both Toyotas are on track. In the pits Nick Heidfeld asks his crew for news of the weather forecast for qualifying; "it should be dry," they tell him, with more than a hint of certainty evident in the engineer's voice.

Trulli posts the first time of the day, crossing the line at 2:05.997, moments later, Schumacher posts 1:52.199, this prompts a flurry of activity in the pits. As the German improves to 48.781, Davidson, Fisichella, Kovalainen and Webber head down the pitlane.

However, Schumacher goes off at Ste Devote disappearing up the slip road as though he's decided to head home for the remainder of the weekend.

Moments later, Webber, having gone quickest (48.611), follows Schumacher's example and heads off down the very same slip road. At times like this one fondly remembers the exploits of Alesi and even, dare we say it, Michael Schumacher.

Alonso is on track, and at the end of the first sector is already almost a second up on Webber. He gives the Nouveau Chicane the respect it deserves, still managing to stay ahead of the Australian.

The Spaniard goes second (48.067), to Davidson, who moments earlier posted a 45.542. However, Webber soon reclaims the top spot, crossing the line at 44.517. Elsewhere, a Toro Rosso disappears up the slip road at Ste Devote.

Wurz spins at Mirabeau, causing a bit of a traffic jam, as Alonso also has a moment. Elsewhere, Raikkonen goes quickest, ahead of Heidfeld, Davidson and Webber.

Anthony Davidson is on track, and following a major lock-up goes seventh (46.822), slotting in behind his teammate. Elsewhere, Felipe Massa is on track.

A 43.505 sees Liuzzi go second, as Hamilton goes quickest in the first sector, only to get it wrong at the Nouveau Chicane. Nonetheless, the Englishman goes second to Liuzzi, who has just posted a 41.108.