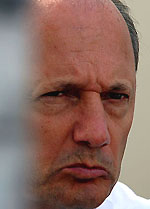 On the day that his protégé, Lewis Hamilton, crashed out of free practice, McLaren boss Ron Dennis has hit out at the media for suggesting there is a rift within his team, and at so-called experts who insist on advising how the English youngster's precocious talent should be handled.

Referring to the media, which in Britain, in particular, has been at pains to suggest a rift within the Woking team, with The Times claiming that Hamilton's success has led to "civil war" within his team, Dennis said: "I'm amused at how some magazines have tried to position the team as having conflict in it. When there is absolutely nothing further from the truth.

"If you were able to see the body language, how they compete playing in videogames and all of these things," he continued, "you'd realise that yes, they are competitive and want to win but not to the detriment of the relationship they have with each other or the relationship within the team."

Hardly a day passes without some pundit popping up, eulogising Hamilton's skills and then advising how best his talent could be managed. Pitpass has given these quotes a wide berth, famously recalling Jackie Stewart's claim that Jan Magnussen was the "new Ayrton Senna".

"The other thing I find slightly annoying," Dennis told reporters, "is that there seems to be a rash of so-called experts, people who have never really run a competitive Grand Prix team, who suddenly profess to be so knowledgeable about what is and isn't right for Lewis, what is and isn't his character strength and his weaknesses.

"I think they should just be quiet and concentrate on their own business," said the Englishman, "which I'm sure would be better for them.

"I don't want to be too aggressive to those people," he continued, "but they know who they are and they are failures in many of the things they've done. This is a success story and their opinions are obviously sought by those members of the media that struggle with their own position."