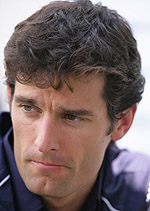 Writing for the Daily Telegraph, WilliamsF1 driver, Mark Webber, who heads to Red Bull in 2007, has admitted that he will not be sorry to see Michael Schumacher leave Formula One, claiming that in many ways the sport will be better off without the German.

"I came into this sport looking up to Michael," admits the Australian. "He was an inspiration to me. But it's like seeing a stunning girl in the playground. When you get close to her you start to notice some of her flaws.

"Alain Prost was my real hero," he continues, "but Schumacher rocked up and took the story on. His attention to detail was just unbelievable; the way he used his power and influence to manipulate situations to suit him. He never lets up. He is amazingly hungry.

"Being single-minded is fine," admits the WilliamsF1 driver, "but sometimes the lengths Michael has gone to in order to succeed has left an awkward taste in the mouth. Sometimes when the adrenalin is flowing we do things that are a bit over the top. You can let that go. But Michael has been more cynical than that, doing things that are over and above what you might expect.

"As a fan I want my sport to be looked at in the right way," he adds. "You want your main man to be a hero. You don't want to be defending him all the time. You can give someone the benefit of the doubt only so often. At times I have run out of excuses for him."

The Australian says he believes that the way in which Schumacher accepted defeat in Japan was an act, and warns that the title fight is far from over.

"As always with Michael everything is prepared. In every race there are three, four, five possible scenarios. In Japan he wheeled out the one that best suited his purpose. When he was walking back to the pits at Suzuka the gears in his brain were spinning. He was working out how best to handle the situation. If he had come back saying the fight was still on, that he could still win the championship here, it would have pumped up Fernando Alonso even more. If he can take five per cent off Alonso's performance here, so much the better. He will take this title any way he can. He's a very clever guy."

With Schumacher due to hang up his helmet after this weekend, Webber is unsure whether he will ever be able to forget some of the negatives that surround the German.

"I think things might be different when he has stopped racing. Some of the discussions we have had have been really genuine. Back in 2003 at the Monza test, talking about his family, things like that. They draw you back the other way. I hope we can go back to that when he is removed from all of this. I hope so, but I'm not sure."