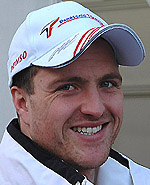 Ralf Schumacher believes that his brother, Michael, who is due to retire at the end of the season, is heading towards his eighth World Championship title.

"Michael has the chance, he knows it," the Toyota driver told Reuters, ahead of this weekend's Japanese Grand Prix. "He missed it last year and he's desperate to win the title this year.

"From a package point of view you have to say Ferrari is clearly stronger," he continued, "and Michael will be very focused. It would be the perfect way of saying goodbye to everybody."

In addition to the Michael/Ferrari 'package', Ralf believes the situation at Renault, will help his brother.

"I think with Fernando leaving Renault and there being some trouble with them fighting with each other a bit in the team, I clearly see Michael having the upper hand," said the German.