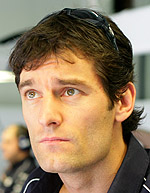 Ahead of his last race with the WilliamsF1 team, following two seasons which promised so much but ultimately delivered little, Mark Webber has admitted that he regrets joining the Grove based outfit.

"Flavio was never keen for me to go to Williams and I know I made a costly mistake by not listening to him," the Australian told the Sydney Morning Herald, referring to his manager, Flavio Briatore. "He was very keen for me to go to Red Bull next season, so I wasn't going to ignore his advice a second time. It's a joint management decision and one we all think is the best option for my career. We've rolled the dice so now we just have to see how it tumbles."

Looking back on his two years with the English team, which netted 43 points, and one trip to the podium (Monaco 2005), Webber admitted: "I think it's fairly safe to say that I won't be looking back at my two years with Williams with any fond memories.

"When I signed with the team, I was hoping to stay at Williams for a long, long time," he continued, "but it wasn't to be. Frank will probably look back at me and think it wasn't successful either.

"It's odd to think that I've never been in this situation before in my F1 career," added the Australian, who, having made his F1 debut with Minardi in 2002, spent two years with Jaguar, before heading to WilliamsF1. "The last four years have been spent with teams that have slipped from grace, Williams and Jaguar, although each one taught me an awful lot.

"I've learned that reputations mean nothing - that the past and history does absolutely nothing for you in the present," he continued. "It's very important to respect things that have happened in the past but as has been proved in the last couple of years, it is not an automatic guarantee for success."

Looking ahead to 2007, Webber joins up with Red Bull, which, ironically, was formed from the remains of the Jaguar team, and features 'superstar designer' Adrian Newey, even if the team has yet to decide which engine it will be using, Ferrari or Renault.

"Now I'm with a team which basically has a clean sheet so, in that respect, its an exciting, new chapter for me," he said. "Red Bull has all the ingredients to make the base for a very satisfactory season."

However, acknowledging the disappointments of the past, Webber admits that it would be unwise to start making predictions: "I can talk about it as much as I want between now and Melbourne next March, but it'll only be on the Saturday of Australian Grand Prix weekend that we'll really find out how good the car is. Adrian Newey was a huge part of my reason for going to Red Bull, but as I've said, reputations don't necessarily equal success."