Schumacher out to have fun 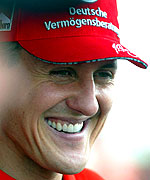 After an intensive last three weeks, the weekend was a quiet one for Michael Schumacher. The Ferrari driver had wanted to take a short break after the two Asia races and the two test days in Spain. Time was needed to recharge the batteries seeing as the seven-time world champion wants to be in peak form for the last race of his career.

Interlagos would have been more enjoyable had he been heading into it on the back of a win. The German would like nothing better than to sign off with a victory for his team.

"The Constructors' title would be a great achievement," he says. "The boys deserve the title. Whoever is able to turn around a situation like the one we found ourselves in this year, climbing back to the top and working extremely hard and passionately, merits huge respect and they have all my respect. They are the best at what they do and the Constructors' crown would be fully deserved."

The strategy for the Grand Prix of Brazil is obvious: "Attack! We are aiming for a one-two, nothing less," he admits. "This is the only hope we have of taking the Constructors' title and it is all we can do. Everything else is out of our hands".

After the bitter end to the Grand Prix of Japan, the Italian team is nine points down on Renault. Making up such a gap in one race is no easy task but is achievable. Michael is looking forward to the race at Interlagos. "Naturally, I am aware of the fact that, after almost sixteen years, this is my last race. I hope that it will be an exciting race, that way I will take with me the marvellous feeling that only a win can bring."