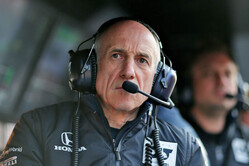 AlphaTauri boss, Franz Tost admits that his preference would have been to have Mick Schumacher in the second car.

When it became clear that Pierre Gasly wanted out, the search was on for a teammate to partner Yuki Tsunoda, and with Schumacher's future at Haas looking uncertain Tost was keen to have the youngster on board.

However, Helmut Marko, the man behind the Red Bull Junior Team programme and predominantly focussed on the interests of the 'big team' appears to have had other ideas.

"Mick is talented and also has what it takes to drive successfully in Formula 1", Tost tells Germany's RTL. "I would have actually liked to have had Mick in the car."

However, it appears that Marko prevailed, for the seat went to Nyck de Vries, a product of McLaren's young driver programme, while Mercedes snapped up Schumacher up for its reserve driver.

Though team boss at AlphaTauri, the real power lies with Marko and it is most likely that the Austrian wanted De Vries in the second car in order to size him up ahead of a possible move up to Red Bull.

As previously reported, no less than six of the drivers on this year's F2 grid are the product of Marko's young driver programme.