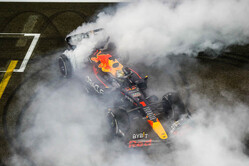 While last year's race was emotional for altogether different reasons, today there are sure to be a few moist eyes, a few lumps in throats.

OK, he never exactly took the world by storm, but we bid adieu to Nicholas Latifi. Though, courtesy of a very, very wealthy father, he was able to indulge himself like most of us could never even dream and barely made an impact on the sport, we commend him for his bravery in even getting into one of these cars. Nicky, we salute you.

Mick Schumacher made an impression, but sadly it wasn't enough. Like Bernie we believe his surname made things almost impossible for him. Yes, it opened doors but it also placed an unbearable burden on his young shoulders, shoulders already carrying a burden of unimaginable pain. He has always been a slow developer, so perhaps a year as a reserve or development driver will help him hone his obvious skills.

Was Daniel Ricciardo's biggest mistake leaving Red Bull or was it leaving Renault, only the Honey Badger knows that one. Though the money was good, McLaren was never really an option, not with Zak Brown at the helm and protégé Lando Norris at the wheel. Then again, the Australian did himself few favours. Red Bull has opened the door but it appears to be more about promotional work than a return to racing, perhaps Danny Ric's own decision on 2023 will answer a few outstanding questions.

Finally there's Seb. Having covered his career while in the junior formulae, it was always clear that he was special. How convinced were we? Well, to the extent that we got him to sign his name alongside his hero Michael Schumacher in our coveted copy of Piloti che Gente... before he'd even made his F1 debut.

Then again, the fact that the teenager pretended to cross out Schumacher's autograph was a clear sign of his mischievous sense of humour.

While we've seen our fair share of fairy-tales over the years, it would perhaps be asking the impossible to see all four walk away with points today, but here's hoping that each gets to sign off in style, and that at least two of them return in the not too distant future.

With Mercedes not showing the anticipated pace yesterday, Hamilton and Russell start behind the Bulls and Ferraris. However, on Friday their pace during the race sims was strong, so we are not writing them off.

Then again, considering the improved form in recent weeks, how strange to hear Hamilton admits that the bouncing is back "with a vengeance".

Few would bet against Red Bull and Max wrapping up today's race, but there remains the little matter of the runner-up spot. Heading into this race level - where have we heard that before - the fight for second is a straight-out fight between Perez and Leclerc and it will be interesting to see how their respective teams and teammates attempt to aid them.

Starting from pole, Verstappen will either have to allow his teammate to pass and then ride shotgun for him, which is as unlikely as it sounds, or else Perez, like Sisters, will have to do it for himself.

Behind, the Ferrari pair face a similar scenario, though Sainz is likely to be under instructions to assist his teammate to the best of his ability.

Last week we witnessed a crack in the facade at Red Bull and no matter how much the team attempts to gloss over the situation and insist that it is "private" all eyes will be on the pair today.

However, other than second in the driver standings, today is also about runner-up spot in the Constructors' Championship, that which decides the prize money, and with Mercedes just 19 points behind Ferrari, Leclerc and Sainz cannot afford to be tripping over one another.

Facing his first win-less season since entering F1 in 2007, Hamilton is unlikely to be able to do much about this today, but in his 200th appearance for Mercedes he would dearly love to help the German team finish second in the standings.

Elsewhere, there remains the battle for fourth between McLaren and Alpine, while Alfa Romeo and Aston Martin are battling for sixth and Haas and AlphaTauri for eighth.

Whatever happens today, fairy-tale or not, it is highly unlikely that we are going to witness anything like the controversy of twelve months ago. Fact is, despite the endless positivity from Domenicali, Brawn and ben Sulayem, for many the sport has never recovered from that night, and for many it never will.

As we close the door on 2022 we look ahead to 2023 a season that features the most races in the history of the sport. Those of you have seen the 'trailers' for Las Vegas may already be getting concerned and who can blame you, as the sport continues the seemingly relentless march to become pure entertainment.

Maybe it's inevitable, maybe be isn't, you can't stop progress they are always telling us.

So, rather than fearing what the future may hold for us F1 fans, let's make the most of the present, and celebrate the likes of Seb, Danny, Lewis... and Max while we have them.

In terms of strategy, a two-stop strategy may well be the fastest. Increased tyre degradation compared to last year has created question marks surrounding pre-event simulations. Two pit stops, with an average loss of 22 seconds for each tire change, is projected to be four to five seconds faster than a single stop.

Two options are considered the fastest: start on mediums, change to hards (between lap 16 and 22) complete the final stint on either the medium or hard compound. Completing the final stint on soft tyres is less likely, as it is unlikely to be as competitive as the other compounds. What teams choose to do will also likely be down to their remaining tyre allocation.

Anyone wishing to try a one stop strategy may arrive on the grid with medium compound and then replace them with the hard tyre, with managing the degradation of a longer first stint key. Other options on a one-stop strategy include soft to hard and hard to soft, at which point a safety car would play an important role in the outcome.

Following the anthem, his 19 colleagues form a guard of honour for the departing four-time world champion Vettel.

All are starting on mediums bar Magnussen and Bottas who are on hards and Gasly who is on softs. All are on fresh rubber.

They head off on the formation lap, all getting away cleanly, though Russell, in particular, takes his time.

"Let's finish the job in the best possible way," Alonso is told.

They're away! Despite a strong start Perez falls behind Verstappen as the head into Turn 1, with Leclerc tucked in behind ahead of Hamilton and Sainz.

Norris goes around the outside of Russell in Turn 1, with Vettel also looking to make a move on the Mercedes.

Leclerc looks to make a move on Perez at the hairpin but the Mexican slams the door.

Sainz makes a late move on Hamilton at the hairpin, and in a repeat of 2021, causes the Mercedes driver to miss the corner and rejoin the track ahead of the Ferrari

As the stewards announce that they are investigating the Sainz/Hamilton incident, the Spaniard says: "He was super aggressive, he forced me off. He did the same to Verstappen last year."

Stroll has made up two places and Albon three.