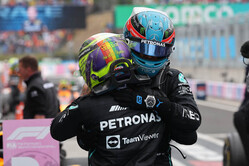 As George Russell put it on Sunday, at the start of the season, Mercedes was finishing a minute behind the lead. "Now it's ten seconds in the last couple of races," he said. "If we can continue on that path, we will definitely be in the hunt."

"We've got more coming," he warns in the team's post-Hungary video debrief. "We are trying to bring some performance to Spa that will hopefully close that gap, we haven't got far to go now.

"We're quite excited," he adds, the last few races have been the most fun we've had all year and we are just hoping that we can take that extra step because we definitely want to be winning races in the near future, so we are working hard to try and achieve that."

Most importantly, as far as the Briton and his team are concerned, is that the recent success has largely been on merit.

"This last double podium was particularly satisfying because we weren't relying on the misfortune of anyone dropping out with a reliability problem," he says. "The car pace was also very good, and it is always nice to have a good race before you go into that period of holiday.

"The most satisfying thing though is to see where the car is in terms of pace now in qualifying and in the race.

"We had a lot of ground to make up from the start of the year," he admits, "we've been working really hard trying to bring bits to every race and it is really satisfying now to see that we are racing with the Ferraris, with the Red Bulls right to the front."

Like team boss, Toto Wolff, Shovlin believes that but for his DRS issue in qualifying, Lewis Hamilton would have qualified better than seventh in Hungary and would therefore have been in contention for the race win.

"The big regret is that we had that DRS problem right on his only new tyre in Q3," he admits. "Had we got both on the front-row, we would have been in a good position to control the race.

"If you actually look at how it plays out strategically though, it would have been very difficult for Lewis and that comes down to the start tyre. With Max having started on the soft, he had two mediums to go to, to finish the race and that meant he could stop earlier and was always going to be able to do a more effective undercut on Lewis than we could have done to defend. So, that's the main thing on a strategy point of view, we don't think we missed any opportunities but there were other incidents.

"Max also had that spin that cost him very little," he adds. "Had that been more of an issue Lewis could have been in contention at the end. Had there been a bit more rain, Lewis was hoping for that to come a bit sooner because his tyres were in good condition. But overall, we need to make the car a little bit quicker, and we certainly need to make sure that we've got the DRS fixed in qualifying."